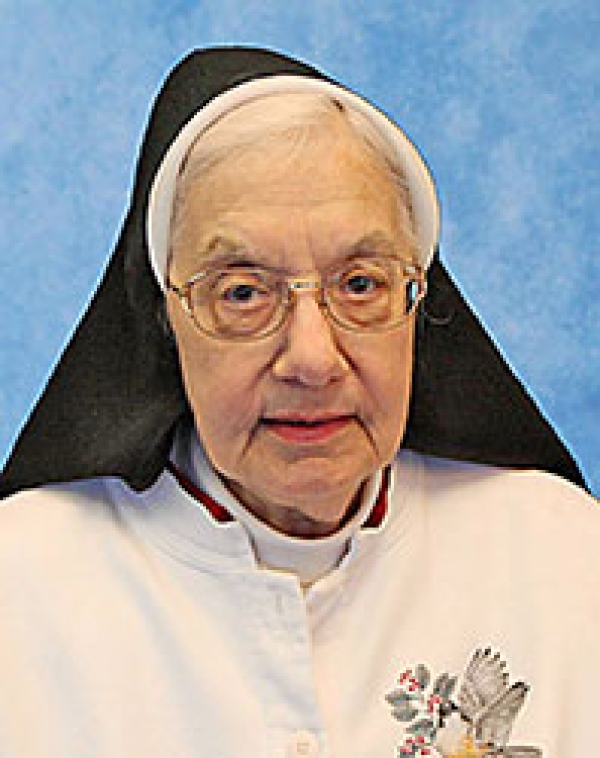 Father Maurus (Frank) was born July 10, 1931 in Teutopolis, the son of Albert and Mary Hawickhorst. He was ordained a priest in June 1958 and left in November 1959 for the mission in the Amazon Valley of Brazil, South America.

Sister M. Francis Kuo, OSF, of the Hospital Sisters of St. Francis, died on Oct. 24 at St. Francis Convent in Springfield. She was 97 years old.

Sister Francis, the former Mary Kuo, was born in Beijing, China on Jan. 12, 1920, the daughter of Joseph Kuo and Ann Shon. She entered the congregation on March 25, 1944 and professed her religious vows on Sept. 17, 1947 in Tsinan, China. Sister Francis had to leave her homeland in 1948 when the Communist threat became serious. She and the other sisters traveled to Springfield, leaving behind their ministry to the sick and poor in their hospitals and clinics. 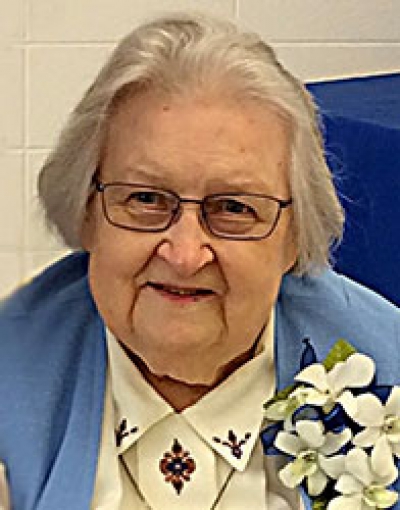 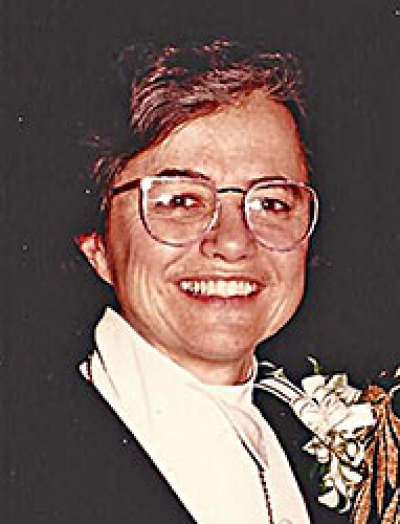 EUREKA, Mo. — Sister Darlene (Margherita) Fulgenzi, OSU, died peacefully at St. Andrew’s at Francis Place in Eureka, Mo., on Oct. 11. The daughter of Adolfo and Margaret Daniele Fulgenzi, she was born on Feb. 28, 1938 in Springfield.

Sister Darlene attended St. Joseph’s School in Springfield and Ursuline Academy in Springfield, graduating in 1956. She entered the Ursuline Sisters in July 1956 and professed her vows in January 1959. She earned her bachelor’s degree in classical languages from the College of New Rochelle (New Rochelle, N.Y.) and her master’s degree in Latin from St. Louis University. She also studied Scripture and spirituality at the Ursuline Generalate in Rome, Italy during her tertian year of spiritual renewal in 1977-1978. 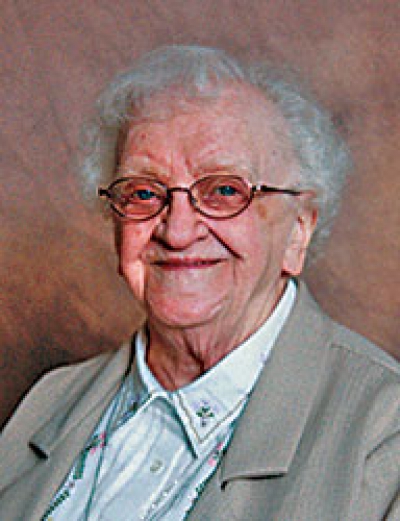 RUMA — Sister Teresita Kern, ASC, died Friday, Oct. 13, at the Ruma Center in Ruma. She was 93 and had been a professed member of the Adorers of the Blood of Christ for 76 years. 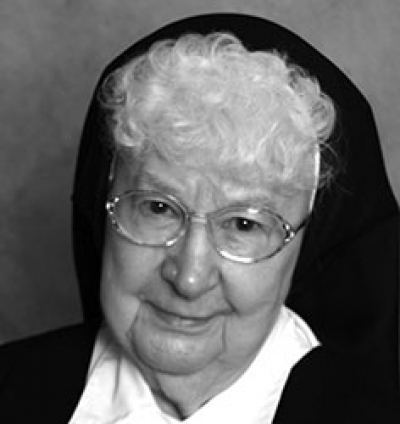 RUMA — Sister Rita Marie Lucash, ASC, died Oct. 2 at the Ruma Center in Ruma. She was 89 years old and was a professed member of the Adorers of the Blood of Christ for 70 years. 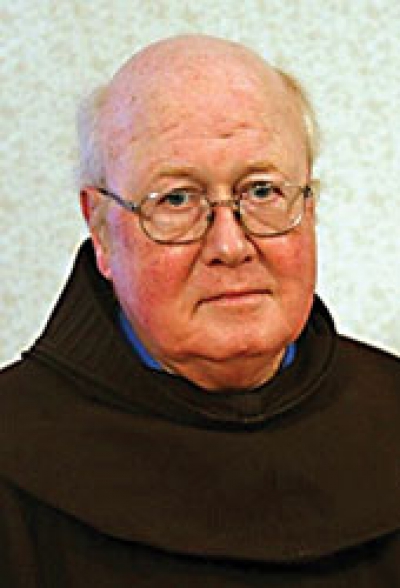 Brother Patrick T. Shea, OFM, died Sept. 29 at HSHS St. John’s Hospital fortified with the sacraments of his faith and the prayerful support of his brothers and sisters in religious life and of his colleagues at the Diocese of Springfield in Illinois Catholic Pastoral Center. He was 69 years old.

Born June 29, 1948 in Rice Lake, Wis., the son of Francis Michael and Martha (Early) Shea, he lived with his family in Shell Lake, Wis., and Ashland, Wis. 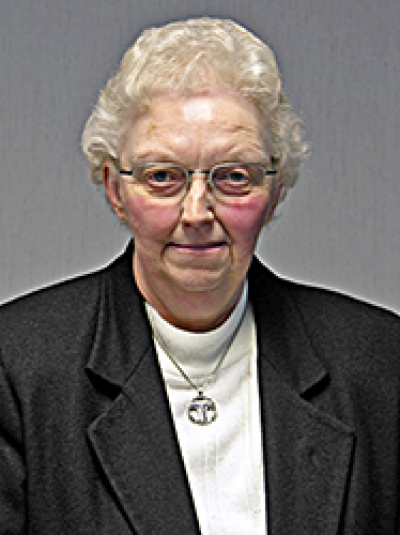 Sister Mary Jo Schulte, OSF, of the Hospital Sisters of St. Francis died on May 7 at St. Francis Convent, Springfield. She was 77 years old.

Sister Miriam Joseph Bardot, OSF, of the Hospital Sisters of St. Francis died on April 24 at St. Francis Convent in Springfield. She was 101 years old.

Sister Miriam Joseph, the former Kathryn Leona Bardot, was born in Luebbering, Mo., on March 17, 1916, the daughter of August and Cecilia Barband Bardot. She entered the congregation on Feb. 2, 1937 and professed her religious vows on Oct. 4, 1939. 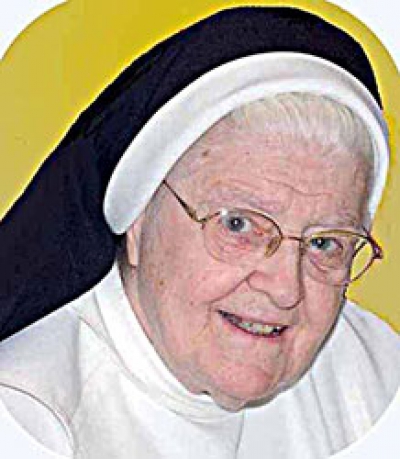 Sister Genevieve was born in Newark, N.J., on June 15, 1920. She is predeceased by her parents George James and Genevieve Turbott James, and her brother George. 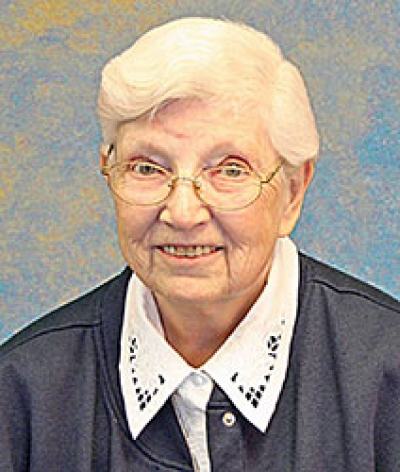 Sister Laurentia ministered most of her religious life in elementary education. She taught or was principal in parish schools throughout central and northern Illinois and in Duluth, Minn. In 1992, she began her ministry as parish pastoral associate, serving at St. Gertrude Parish, Franklin Park and at Corpus Christi Parish, Carol Stream. In 2002, she became unit secretary in the Dominican Sisters’ nursing facility at Sacred Heart Convent and cared lovingly for the needs of the sisters until she was no longer able. 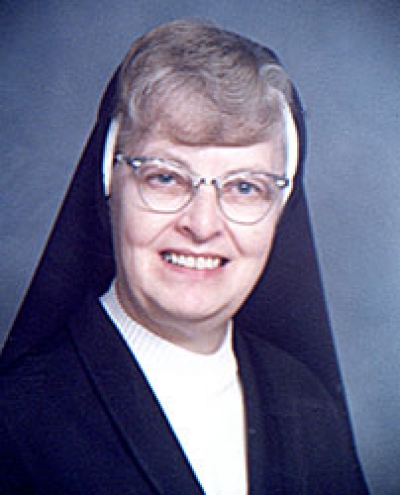 DONALDSON, IND. — Sister Wilma Boeving, (Dolores Ruth) PHJC, passed away on March 26 at the Catherine Kasper Home in Donaldson, on the eve of the Feast of the Annunciation.

The Feast of the Annunciation is a special feast day for the Poor Handmaids of Jesus Christ. Luke 1:26-38 tells of Gabriel’s visit with the message that Mary will conceive and give birth to Jesus. Mary replies, “Behold, I am the handmaid of the Lord. May it be done to me according to your word.” 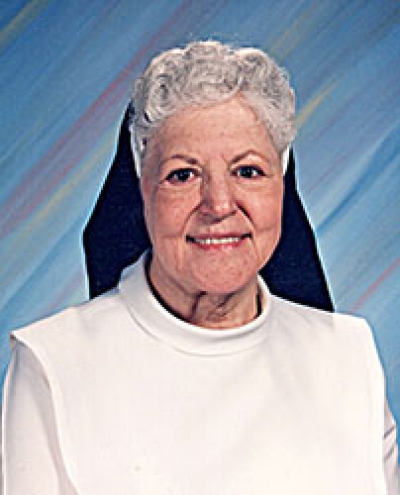 Sister M. Carmen is remembered by many Dominican sisters and priests, as well as Viatorian priests and brothers, as a gracious hostess and wonderful cook and baker. Her gifts were appreciated at the Dominican priory in Winona, Minn.; the Viatorian Province Center in Arlington Heights; and at every Springfield Dominican convent where she served. 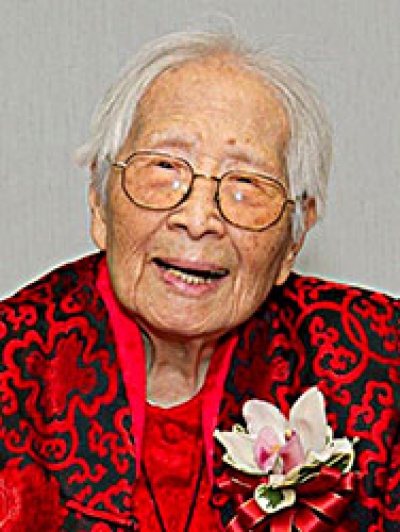 Sister M. Gabrielis Hu, OSF, of the Hospital Sisters of St. Francis, died on Feb. 11 at St. Francis Convent in Springfield. She was 105 years old.

Sister M. Gabrielis, the former Mary Hu-Cheng-Kuan, was born in Wucheng Shandong Province, China, on Nov. 11, 1911, the daughter of Anthony and Mary Li Hu. She entered the congregation on July 31, 1930 in China and professed her religious vows on May 18, 1933 in Springfield. In 1936, she graduated from St. John’s School of Nursing after which she rejoined the Sisters’ community in China and served as a nurse and directress of novices. The Sisters left China to travel to America in 1948 when the Communists’ threats became serious. Over 40 years would pass before Sister Gabrielis received a visa to return to her native land to visit her family. 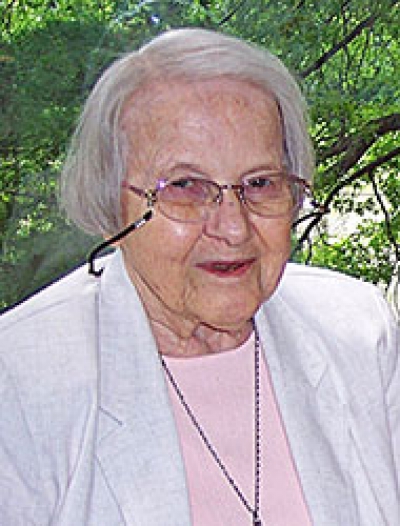 ST. LOUIS — A Mass of the Resurrection was celebrated Jan. 7 in Dallas, for Sister Kathleen Barnes, OSU, who died peacefully Dec. 1, 2016 in New Orleans. She served in the Diocese of Springfield in Illinois.

The daughter of George Sanderson Barnes and Agnes Phelan, she was born Jan. 16, 1921, in Little Rock, Ark. Her father’s job kept the family traveling throughout her childhood and she attended eight different elementary schools. She received her secondary education at Ursuline Academy in Dallas, graduating in May 1938. 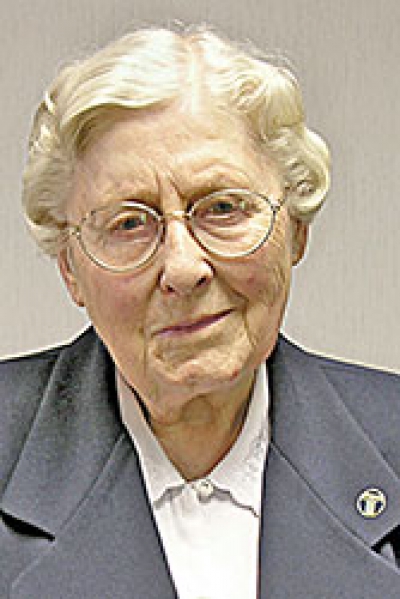 Sister Frances Elizabeth Schmitz, OSF, of the Hospital Sisters of St. Francis died on Jan. 19 at St. Francis Convent in Springfield. She was 94 years old.

Sister Frances Elizabeth was born in Waterloo, Iowa on March 1, 1922, the daughter of Henry and Agnes Beck Schmitz. She entered the congregation on Feb. 2, 1945 and professed her religious vows on Oct. 4, 1947. 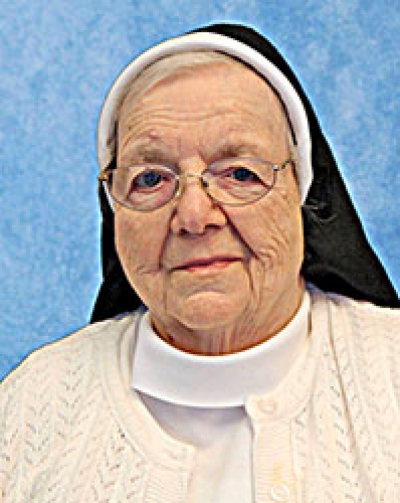 Sister M. Rosalima ministered as an elementary and high school teacher for 56 years, primarily in Central Illinois and at Marian Catholic High School, Chicago Heights, where she taught math and science from 1961-1982. From 1993-2003, she worked in medical records at St. Mary-Rogers Memorial Hospital in Rogers, Ark., and from 2003 until retirement in 2014, she served as an assistant librarian at Sacred Heart Convent. 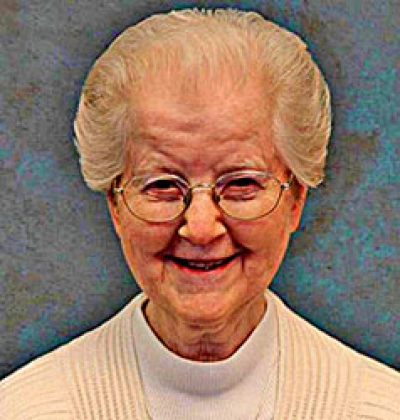 Sister Janice faithfully served God’s people and her Dominican Sisters for 66 years, first as an elementary school teacher in Springfield and the Chicago suburbs (1951-1970), then as a home economics teacher at Marian Catholic High School, Chicago Heights (1970-1982) and Rosary High School, Aurora (1982-1986). 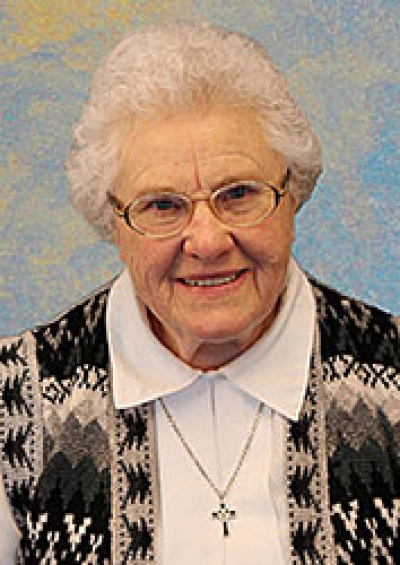 Sister Doris, who was known as Sister M. Leona for a time, served 11 years as an elementary school teacher in Chicago, East Moline and East St. Louis, before beginning a 33-year mission in Peru. There she served as a teacher and pastoral minister in La Oroya, Lima, and Llanopampa. Sister Doris returned to the U.S. in 1998 and after a sabbatical, ministered among Spanish-speaking people in Kentucky and in Freeport, Jacksonville and Beardstown. 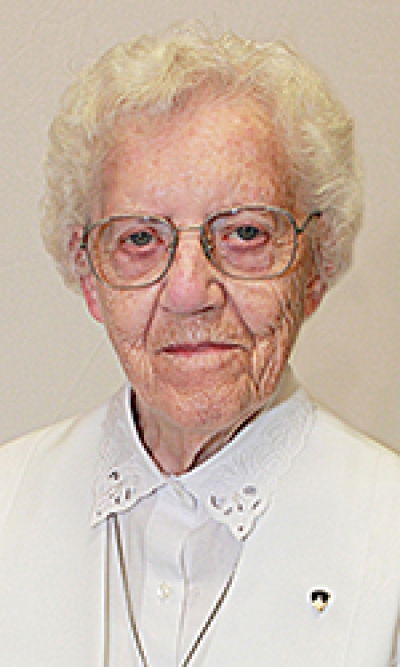 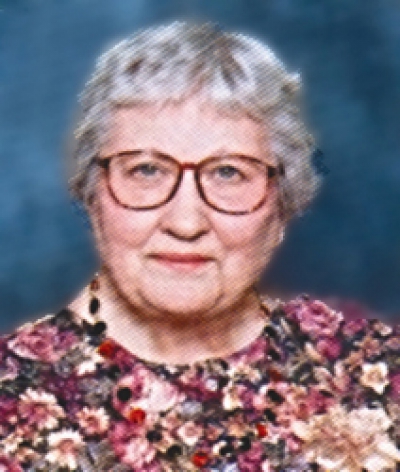 Gilda V. Fulgenzi, a long-time and devoted servant of the Diocese of Springfield in Illinois, died on Dec. 3, at St. Joseph’s Home in Springfield. She was 91 years old.

She was born June 14, 1925 in Springfield to Anthony and Anna (Cardinal) Fulgenzi, and they preceded her in death. 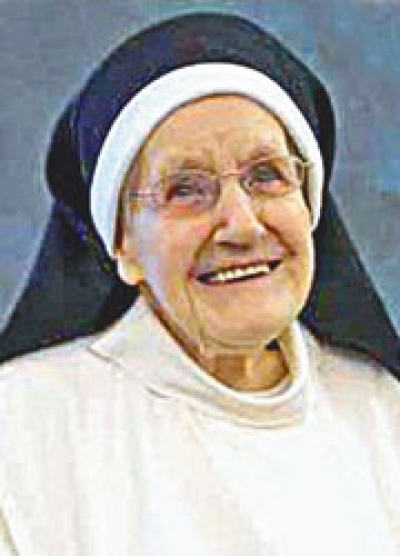 She was born Margaret Jane Murphy in Co Derry, N. Ireland to Mary (née McCloskey) and James Murphy. She was the eldest of five children: Margaret, William, George, Mary and Veronica. 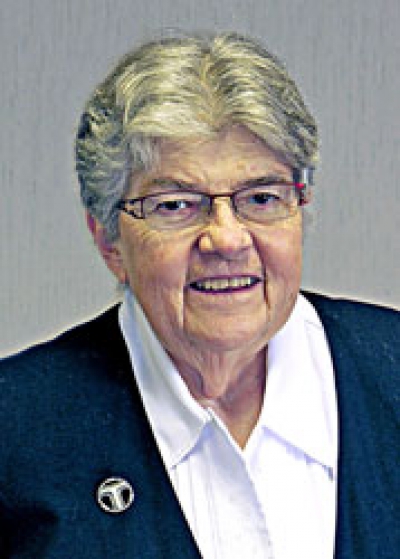 Sister Donna Marie Woodson, OSF, of the Hospital Sisters of St. Francis died on Dec. 18, 2016 at HSHS St. John’s Hospital in Springfield. She was 82 years old.

Sister Donna Marie, the former Marie Evelyn Woodson, was born in Omaha, Neb., on July 10, 1934, the daughter of Cleo Eugene and Josephine Mary Hoban Woodson. She entered the congregation on Feb. 11, 1960 and professed her religious vows on Sept. 8, 1962.

ST. LOUIS — Sister Nancy (Mary Pacelli) Fearon, OSU, died peacefully on Oct. 10 at St. Louis University Hospital. She served in the Diocese of Springfield in Illinois for many years. She was 85 years old.

The daughter of Charles W. and Rose McKay Fearon, she was born on July 25, 1931, in Oak Park. She attended Ascension Catholic School in Oak Park and St. Mary’s High School in Chicago. She entered the Ursuline Sisters in July 1959 and professed her first vows in January 1962. After studying at Northwestern and DePaul universities in Chicago, she earned her bachelor’s degree in economics from The College of New Rochelle in New Rochelle, N.Y. 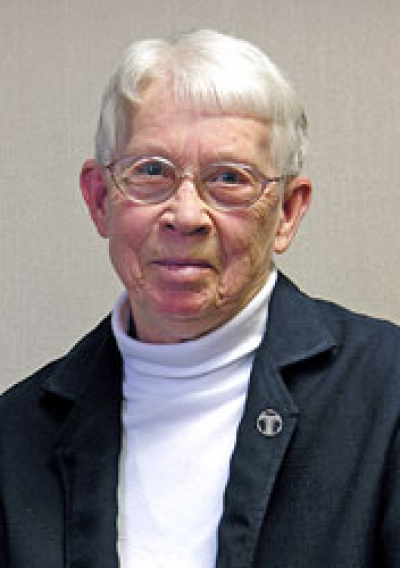 Sister M. Kenneth Wildt of the Hospital Sisters of St. Francis, died on Oct. 11 at St. Francis Convent in Springfield. She was 86 years old.

Sister Kenneth, the former Laverne Wildt, was born in Washington, Mo., on March 22, 1930, the daughter of Herman and Catherine Zwicke Wildt.  She entered the congregation on Feb. 1, 1947 and professed her religious vows on Oct. 4, 1949. 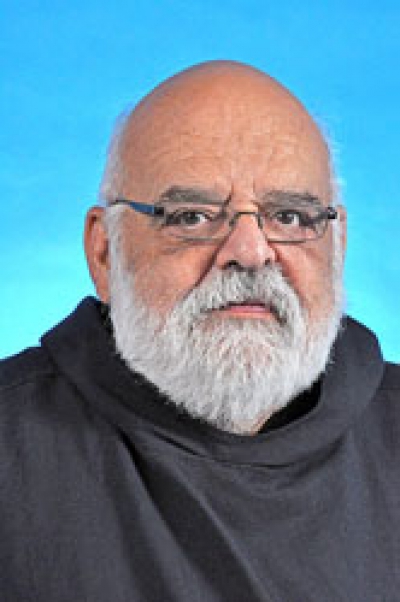 Father Aaron Pirrera, a monk of Subiaco Abbey, died peacefully Sept. 18 at Sparks Regional Medical Center, Fort Smith, Ark. He was 72 years old and had been a professed monk for 36 years and a priest for 31 years.

Born Charles Pirrera in Chicago on Aug. 7, 1944 he was one of two children of Carl and Mary Midiri Pirrera. The family resided in Springfield, where Charles attended Ss. Peter and Paul School and went on to attend and graduate from Griffin High School in 1962. 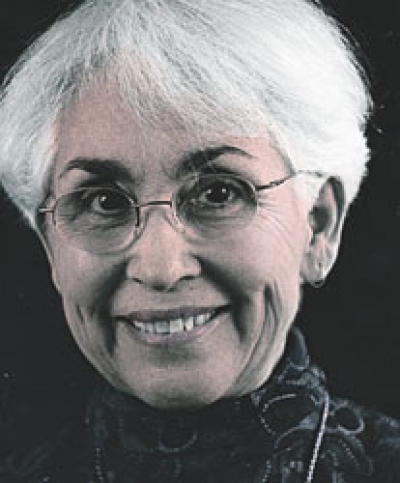 Sister J. Emilia Villarreal, OSU, died peacefully on Aug. 23 at Sunset Care Center in Union, Mo. Her life journey included that of a mother and a member of the Ursuline Sisters. Her ministry as an Ursuline brought her to the Diocese of Springfield in Illinois in the 1990s. 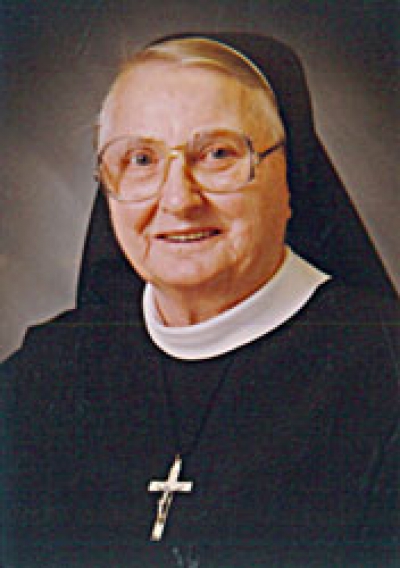 Sister M. Henrietta Eixler, of the Sisters of St. Francis of the Martyr St. George, died on June 17, at St. Francis Convent. She was 86.

She was born Jan. 27, 1930 in Meppen, Germany to Heinrich and Anna (Huer) Eixler and baptized Agnes. 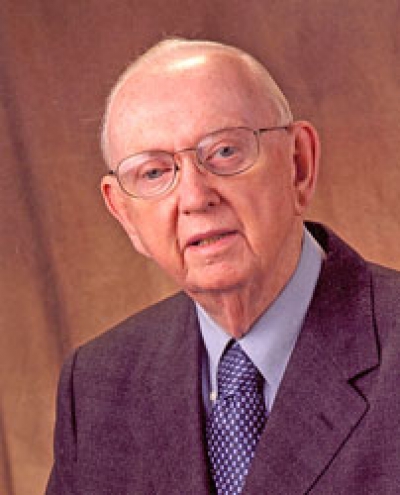 ARLINGTON HEIGHTS — Brother Leo V. Ryan of the Clerics of St. Viator died on June 22 at the Moorings of Arlington Heights Rehabilitation Center. He was 89 years old.

Brother Ryan was born on April 6, 1927 in Waukon, Iowa, the son of John and Mary (O’Brien) Ryan. He was an Army veteran and held a bachelor’s in business administration from Marquette University, an MBA from DePaul University in Chicago and a Ph.D. from Saint Louis University School of Commerce and Finance.