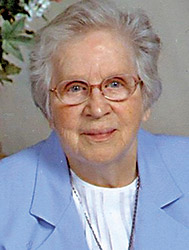 The daughter of Raymond F. Cour and Frances Irene Greeley, she was born Jan. 11, 1924, in Springfield. As a young student at Ursuline Academy, she was captivated by stories of the missions and dreamed of the day when she could give her life to this work. She entered the Ursuline Sisters in Crystal City, Mo., in 1944 and made her vows in 1947.

Sister Celeste earned a bachelor’s degree in math from the College of New Rochelle in New York and a master’s degree in education from the University of Notre Dame.

She taught briefly in Galveston, Texas, before heading for South America, where she served for eight years in the missions in British Guyana and Barbados. She returned to Springfield in 1959 and held several leadership positions in the local Ursuline community. She taught math at Ursuline Academy from 1959-1962 and was bursar for Springfield College in Illinois from 1963-1971. She also served in local leadership in New Orleans before joining the Central Province leadership team in Crystal City, Mo., as assistant provincial in 1981. She was provincial from 1984-1990.

Sister Celeste donated her body to St. Louis University. A memorial Mass will be celebrated at 10:30 a.m. Saturday, March 28, at Mary Queen of Peace Catholic Church in Webster Groves, Mo.

Gifts in memory of Sister Celeste may be made to the Ursuline Sisters Retirement Fund, 353 S. Sappington, St. Louis, MO 63122.