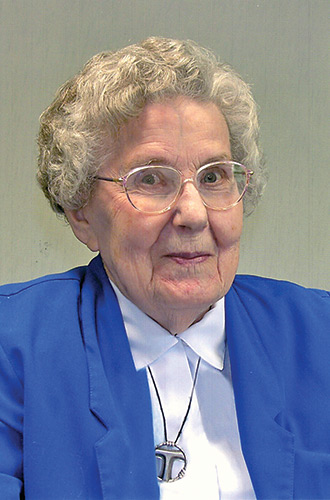 Sister Rose Duchesne Noelke, OSF, 100, of the Hospital Sisters of St. Francis, died on May 30, at St. Francis Convent, Springfield.

Sister Rose Duchesne, the former Leona Mary Noelke, was born in Washington, Mo., on April 22, 1920, the daughter of the late Henry and Rose Barbara Gerritson Noelke. She entered the congregation on Sept. 23, 1949 and professed her religious vows on June 13, 1952.

In addition to her parents, she was preceded in death by six brothers, Theodore, Harry, Anthony, Leonard, Maurice, and Cyril Noelke and one sister, Rosemary Sowinski.

She is survived by one brother, Alfred (Doris) Noelke of Washington, Mo.; a sister-in-law, Teresa Noelke of Hermann, Mo.; several nieces and nephews; several great-nieces and great-nephews; as well as her Franciscan Sisters with whom she shared her life for over 70 years.

Private services will be held on June 3. A memorial Mass will be celebrated at a later date.

The Franciscan Sisters and family were served by Butler Funeral Home—Springfield.