Father Kennedy passes away at age 93

QUINCY — Father John B. Kennedy, senior priest of the Diocese of Springfield in Illinois, died Aug. 7 at Blessing Hospital in Quincy. He was 93 years old. 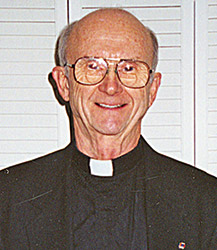 In 1928 his father’s work brought the family to Springfield. For the next three years his father’s work took the family to three different locations in Chicago during the summer months. In 1932, he started school at the Cathedral Grade School in Springfield. His father’s job took the family to another Illinois town, Paris, in the summer of 1937. In September 1937, he started fifth grade at St. Mary’s School in Paris. He went on to attend four years of high school at Paris High School, where he participated in athletics and was captain of the football team his senior year.

On July 18, 1945, he was inducted into the U.S. Army. He took basic training at Camp Walters, Texas. He then worked at separation centers in Camp Edwards, Mass., Fort Devens, Mass., and Fox Dix, N.J. He was discharged from the Army in March 1947.

In September 1947, he enrolled at Rockhurst College in Kansas City, Mo. As a sophomore at Rockhurst, he decided that he wanted to be a diocesan priest and was advised to stay at Rockhurst and major in philosophy and take plenty of Latin courses since the textbooks and examination in the seminary would be in Latin.

In the spring of 1951, he talked with Bishop William O’Connor about entering the seminary to study to be a priest for the Diocese of Springfield in Illinois. He graduated from Rockhurst College with a bachelor’s degree in philosophy May 1951.

In June 1951 he received a letter from Bishop O’Connor saying that in September 1951 he was to go to St. Mary’s Seminary in Baltimore.

Father Kennedy was ordained May 26, 1956, at the Cathedral of the Immaculate Conception in Springfield. He served as an assistant at Our Saviour Parish in Jacksonville, St. Agnes Parish in Springfield, Ss. Peter and Paul in Alton, and at St. Mary Parish in Quincy. He was pastor at St. Augustine Parish in Ashland, St. Patrick Parish in Decatur, and St. Michael Parish in Greenfield. He retired in 1990 but was the long-time sacramental priest at Sunset Apartments in Quincy and was chaplain for the Fourth Degree Knights of Columbus and Catholic War Veterans. In 2006, Father Kennedy celebrated his Golden Jubilee, or 50th anniversary of his ordination to the Catholic priesthood.

Father Kennedy enjoyed golfing, fishing, hunting, and spending time with his many friends.

He was preceded in death by his parents; and a brother, Joseph Kennedy.

The family wants to thank the wonderful staff and residents at Bickford Assisted Living in Quincy for their love and friendship over the last 12 months.

A Mass of Christian Burial was held Aug. 13, at Blessed Sacrament Church. Interment was in Oakwood Cemetery in Dixon.

In lieu of flowers, memorials may be made to the charity of the donor’s choice.