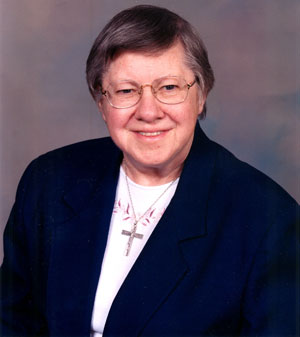 Sister Helen was a graduate of Ursuline Academy in Springfield. She received a bachelor's degree from the College of New Rochelle, N.Y., a master's degree in biological sciences from DePaul University, and a master's degree in pastoral ministry and spirituality from Boston College. She ministered at the Ursuline Convent in San Antonio, Texas, for a few years. During her years in the educational ministry Sister Helen taught at St. Patrick's in Alton; Ss. Peter and Paul in Collinsville; St. Teresa High School in Decatur; and Ursuline Academy in Laredo, Texas. She also taught at Springfield College in Illinois. Most recently Sister Helen taught adult Scripture classes and spirituality courses at the parishes of St. Thomas, St. James and St. Patrick, and Holy Family, all in Decatur.

She was preceded in death by her parents; and a brother: Raymond J. Pflum. She is survived by two sisters: Rita Midden of Springfield, and Betty Craig of South Bend, Ind.; 20 nieces and nephews; many great nieces and nephews; and her Ursuline Sisters.

The funeral Mass was Feb. 21 at St. Francis of Assisi Church at the Franciscan motherhouse with Father James D. O'Shea, celebrant. Burial was in Calvary Cemetery in Springfield.