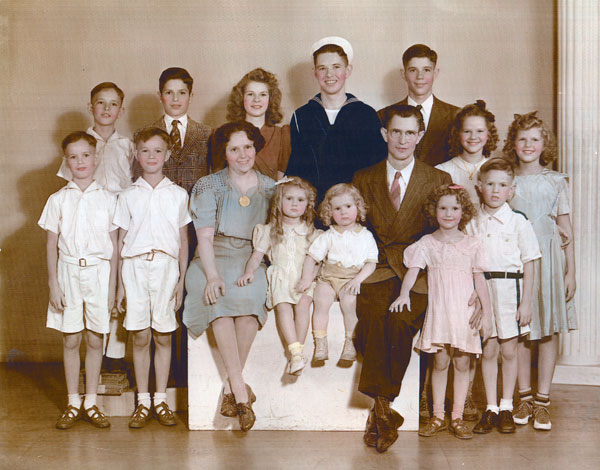 ROBINSON — Every Christmas, when Carol Wagner Wong decorates her Christmas tree, she has one ornament that brings back bittersweet childhood memories.

“Over the years, I have collected ornaments from our travels and for our children and grandchildren,” says Wong, who is a parishioner at St. Elizabeth Parish. “However, the most cherished ornament is the one from my brother, Norbert (Wagner), who died in the World War II Battle of the Bulge on Dec. 20, 1944 at the age of 18.”

Wong explains that she grew up the third youngest of 13 children born to Rose and Harry Wagner of Cincinnati, Ohio. When the two oldest Wagner boys were in their late teens they, like so many other young men of the time, were sent overseas.

“Harold was in the Navy and Norb was in the Army,” Wong says. “Before they left for duty, we had a family picture taken and it is the only picture taken with all 13 children, so it is a treasure itself. As fate would have it, Norb never came home again.” 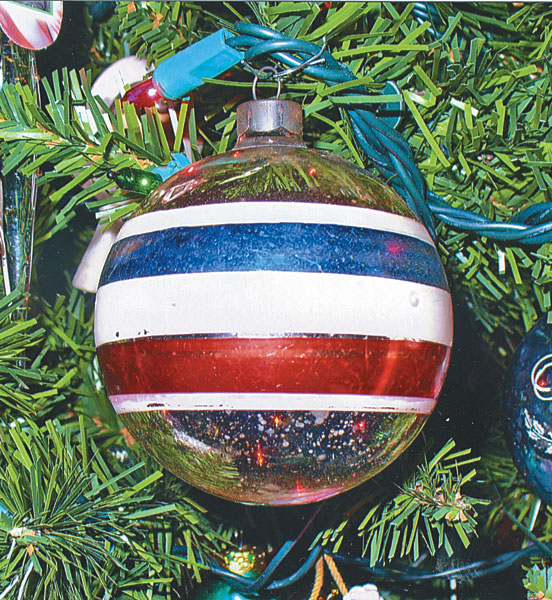 Before he left home for the last time, young Norb gave his mother a dozen patriotic ornaments, silver with red, white and blue stripes. “Everything was patriotic back then,” Wong says. “Those ornaments were proudly displayed on our tree, which was always decorated on Christmas Eve day.”

Wong says she can clearly remember when the family received the sad news about her brother. “We were all there having supper at the kitchen table. When my mother saw the soldiers there at the window, she knew. She went running to the bedroom and slammed the door. We could hear her crying.”

For two years the family was told that Norb was missing in action. “During that time we had the hope that he was still alive; that he was a prisoner somewhere. Then they told us he had died,” Wong says. Norb was buried in a Belgium cemetery and later his body was moved to the family’s burial plot.

“I think that was the only time I heard my parents argue,” Wong says. “My dad said, ‘Let’s just let him be,’ but my mom wanted to bring him home. Eventually my mom won that argument but people still asked her, ‘How do you know that’s Norb buried there?’ I liked the answer my mother always gave, ‘If it’s not, then I have some other mother’s son and some other mother has mine.’”

Wong says the family was naturally devastated by their loss and her mother took it exceptionally hard. She worried even more because so many of her sons (six including Norb) were eventually in the armed services.

“She especially worried about Ralph, because he was in the service during wartime, the Korean War. We all knew our mom had a special place in her heart for her boys. You could hear it in her voice and see it when she talked about them,” Wong says. All of the 12 remaining Wagner offspring lived to adulthood, but four more of the brothers — Jim, Paul, Ralph and Harold — have now passed away.

Other than losing her brother when she was just 7 years old, Wong has happy memories of growing up in a large family. “You know, my mother and father were married several years before any of us were born. They worried they wouldn’t be able to have children, so they prayed a novena. It turns out that our parents had 13 children in 17 years. Mother was 44 when my youngest brother came along.

“In our family the older kids watched out for the younger ones,” she says, adding that money was always tight even though her father worked several jobs. “I was closest to my brother Paul. That’s probably because I was ‘assigned’ to him. But we have been blessed with one another. We don’t get mad at each other like some adult siblings do and my sisters and I go on vacation together every year.”

Rose Wagner died at the age of 75, while attending Mass. Her husband, who was serving at the altar that day, lived 11 more years. “After mother passed away, my father gave each of us who treasured ornaments one for our own tree,” Wong says.

“Since time is hard on fragile class, several have been broken, but I’ve been fortunate that mine survives,” she says. “I do take extreme caution when packing it away, but the memories of my brother, Norb, always are stronger and more special when I place this ornament on the tree.”