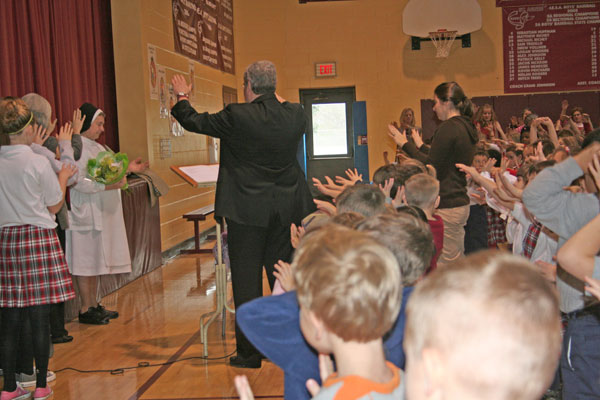 Sister M. Joan Sorge, OP, has been selected as one of a dozen recipients of the National Catholic Education Association’s Distinguished Principal Award.

“I am so pleased to announce that Sister Joan, the principal of St. Agnes School in Springfield, has been selected from our region (Illinois, Indiana and Wisconsin) as a recipient,” said Jean Johnson, superintendent of Catholic schools in the Springfield diocese.

Sister Joan has been a principal in the Springfield diocese for 23 years, seven years at Holy Family School in Decatur, 11 years at Little Flower Catholic School in Springfield and most recently for five years at St. Agnes.

“As an administrator, Sister Joan is an exemplary faith model to her students and faculty,” Johnson said in her nomination letter to the NCEA. “Catholic identity is in the forefront of every decision made at the school, is woven throughout the curriculum in her school and permeates every activity at the school. Her ability to develop and maintain a Christ-centered learning environment is next to none.”

“I am a little overwhelmed by all this,” said Sister Joan to those gathered in the gym upon hearing the news. “I love you all very, very much.”

In addition to her NCEA award, in 2008 Sister Joan was one of nine people recognized by the local Red Cross and was presented the distinguished Hero in Education Award. She was cited as being a hero because she has made an extraordinary difference in the lives of many children. “She has been an inspiration to hundreds and hundreds of students in our diocese,” Johnson said.

“Sister Joan has served as a mentor for many of our new principals and readily assists the diocese whenever called upon. She is a natural at nurturing and empowering others and supporting their efforts,” she said. “Sister Joan very actively collaborates with the area Catholic elementary schools. Her leadership skills were very beneficial to the success of the NCEA planning process undertaken several years ago in our diocese.”

Although the honor was publicly announced in December, Sister Joan will receive the actual award in April at the NCEA convention in Minneapolis.

“We are so proud to have Sister Joan win this award and are so blessed that she is a principal in our diocese,” Johnson said. “She embodies all of the best that we look for in successful Catholic school administrators.”