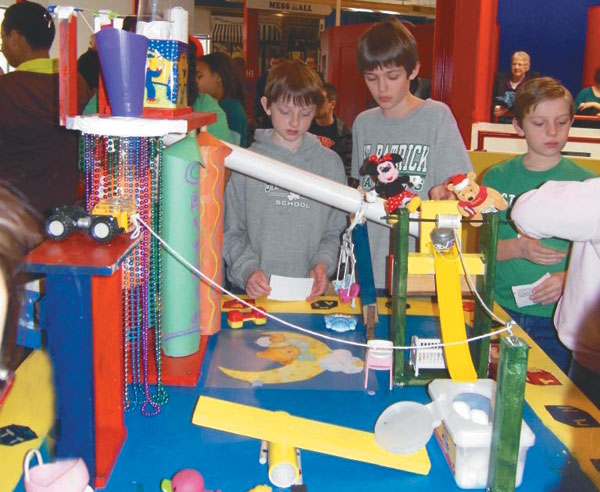 DECATUR — The fifth-grade class at St. Patrick School in Decatur recently took second place in their area in the Rube Goldberg Engineering Project. Goldberg was an engineer turned cartoonist whose drawings of humorous, elaborate machines which performed simple tasks appeared in newspapers and books over 50 years ago.

“Each school enters one project,” said Jan Sweet, principal of St. Patrick’s. “There were 19 schools that participated from our area, so we were excited to earn second place.”

The competition was held at the Children’s Museum of Illinois in Decatur.

The 17 fifth-graders at St. Patrick worked along with their teacher, Kathy Litz, and several engineers to come up with an idea and then complete their winning project. Students became part of an engineering team. While the engineers had an abundance of information to share, it was up to the children to put the devices to work.

“The students have to follow specific guidelines,” Sweet said. “They use materials such as pipes, tubes, plastic and metal. They have to drop something from Point A to Point B and get it there two out of three times. Basically, they have to learn how to work together and problem solve.”

Sweet said the school’s faculty and students owe a special thanks to three engineers from the Decatur area that faithfully came to work as consultants with the students several times over a six-week period. Those engineers are Paul Croswell, Dick Barra and Mary Cave.