Brother James Court is celebrating two special anniversaries this year — and the Franciscan Brothers of the Holy Cross have chosen to highlight those anniversaries at the 16th Annual Brother James Court Benefit Auction and Dinner. This year’s benefit, “The Spirit of Giving Makes a Joyful Sound,” will be held on Saturday, April 10 at the President A. Lincoln Hotel and Conference Center in downtown Springfield.

“This is the 35th anniversary of Brother James Court and also the 80th anniversary of the founding of St. James Trade School,” said Jay Landers, director of development for the home for developmentally disabled men. He explains that Brother James Court, located on the far northeast side of Springfield, is home to just fewer than 100 men. Over the years, approximately 1,200 young men attended St. James Trade School, which was open from 1930-1972.

The benefit evening begins at 5:30 p.m. with a cocktail hour and time to look over the auction items, and will end by 9 p.m. It includes a sit-own banquet, both a silent and live auction, entertainment and a special “Fund the Project” opportunity to make pledges to financially assist Brother James Court.

Illinois Secretary of State Jesse White will be at the banquet, which will also be a commemorative event for National Donate Life Month. One of the performers at the banquet, Brother James Court resident Tim Kiesow, received a donor kidney in 1995. 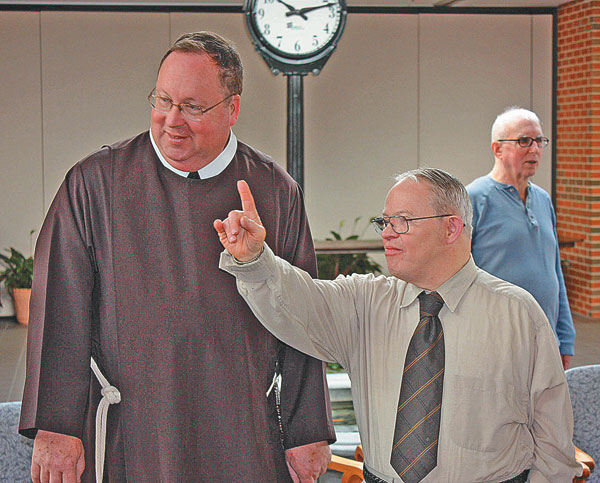 Kiesow, 31, has mild autism and cerebral palsy. He will be singing a Gospel song he wrote, called Him and Me as well as some Beatles’ selections.

“Tim is a very special person and people are very moved by him,” Landers said. “That night all of the Franciscan brothers will be there, along with 30-35 of the men from Brother James Court.”

Tickets for the event cost $75 and will be available through April 10; however, Landers noted that for planning purposes, it is best to purchase the tickets in advance. Donations of auction items continue to come in daily and include, among many others, diamond earrings, a pearl necklace, roundtrip airfare tickets to any Southwest Airlines destination, theme baskets and more.

“Just today we received a baseball bat used and signed by Ernie Banks,” Landers said. “New items are coming in all the time.”

For more information on Brother James Court, check out the Web site at www.brotherjamescourt.com.  To purchase tickets or to help sponsor or make donations to the event, call (217) 747-5905 or e-mail .