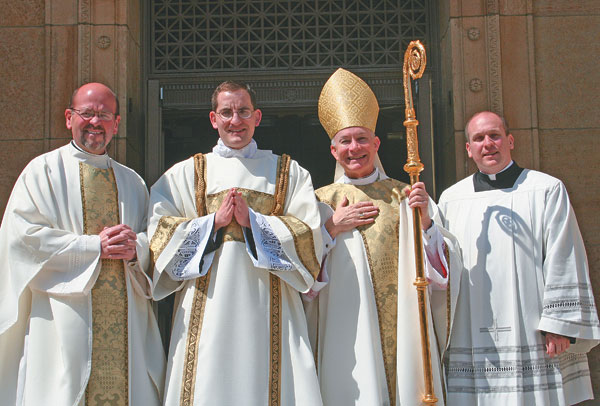 Archbishop George Lucas of Omaha, former bishop of the Springfield diocese, returned to the see city to preside. Msgr. Carl Kemme, diocesan administrator, was one of the concelebrants at the Mass and Father Christopher House, vocations director, was master of ceremonies, along with Deacon Larry Smith.

Deacon Alford, a third-year seminarian at Kenrick-Glennon Seminary in St. Louis, was ordained with the expectation that he will be ordained to the priesthood in the spring of 2011. He was vested during his ordination by his friend Deacon Stephen Thompson, who is a transitional deacon and Theology IV student at Mundelein Seminary.

Speaking about the significance of the ordination during the Easter season, Archbishop Lucas said, “From the earliest days, the Lord has chosen men to represent him. So, our Easter joy is deepened today by the ordination of Brian Alford to the diaconate. Brian is called to a ministry of service. Both that call and Brian’s response has deepened our joy this Easter season.”

Archbishop Lucas also spoke about the importance of prayer. “You must continue to be a man of prayer,” he said. “The Lord will respond to you in prayer. You must allow the will of the Father to be written on your own heart.”

A member of Mother of Perpetual Help Parish in Maryville, Deacon Alford has spent several summers residing at Blessed Sacrament Parish in Springfield, working with Father David Hoefler as his mentor. Father Hoefler was one of the priests present at the ordination, while two Blessed Sacrament parishioners, mother and daughter Vicky and Sydney Compton, brought up the gifts that morning. After the Mass, a reception was held in Deacon Alford’s honor in the new Cathedral atrium.

Deacon Alford can now assist at liturgies, where he can proclaim the Gospel and preach at Mass. He is also able to baptize, witness marriages, and preside at wake services and graveside services.