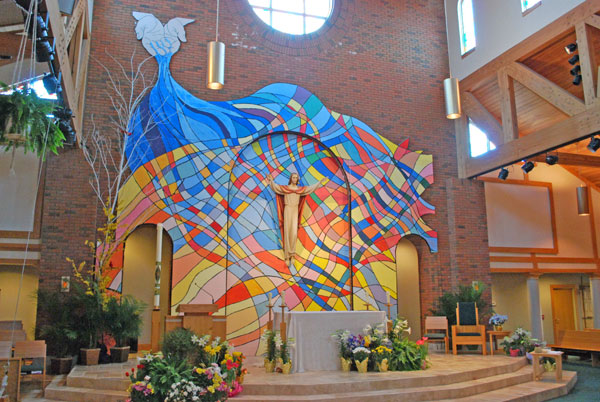 CHATHAM — Parishioners at St. Joseph the Worker Parish might feel like they are celebrating in a new worship space this Easter season, thanks to John Kennedy and all the people who helped with the Easter decor in 2010.

Kennedy, who is not only director of music ministries at St. Joseph but also takes care of arts and environment for the parish, came up with a design that features the Lord’s hands distributing flowing water, the sun and its beams and the words “Alleluia, Alleluia.”

“It was funny,” says Father John Nolan, pastor of St. Joseph. “When I asked people to find the two Alleluias, some people saw them right away and some just couldn’t see them. But they are there.”

Starting on Monday of Holy Week, Kennedy and a crew of volunteers painted panels of foam core material in various colors. Then, when the paint was dry and the Good Friday service was complete, they began tacking them to the brick wall. “They put them on with a tap of hot melt (glue). It dries and then they can eventually pop it off with no damage to the walls. They put toothpicks into the sides of the panel to hold them together.” 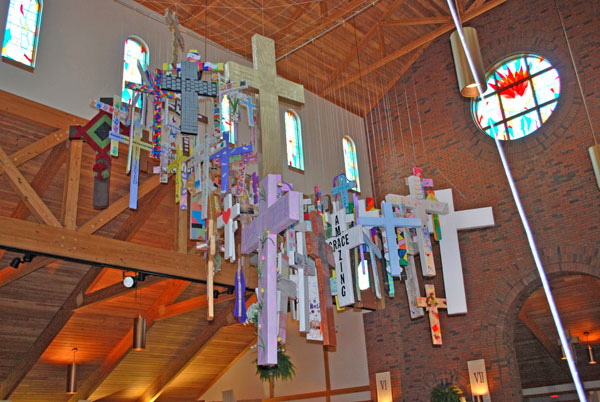 Kennedy’s multi-color design serves as a reredos, but a different element is also hanging from the ceiling in the form of dozens of colored and decorated crosses. “During Lent, we asked that people who wanted to, take a blank cross home from church. We had different sizes and we asked them to decorate them with the joys and sorrows they were carrying during Lent,” Father Nolan says. “We based our request on the story of a man who was able to choose his cross. We handed out the story and asked people to work on them and bring them back.”

During Lent the various-sized crosses hung on two sides of the church. Then, in time for the Easter Vigil, the crosses were suspended from the church ceiling in a spiral that led up to the center gold cross — representing Jesus’ resurrection.

Easter is the time when Kennedy and his decorating crew go all out, Father Nolan says. “They decorate for Christmas, but at Christmas there is more of a subdued elegance,” he says. “Last year, for example, they used a lot of red.” Father Nolan makes sure that pictures of the church decorated for different seasons are posted on the parish web page.

The tradition of uniquely decorating the parish church for Easter goes back many years to the time when the late Father Robert Franzen was pastor — even before the “new” St. Joseph Church was built 10 years ago. Parishioners always look forward to seeing what Kennedy and his volunteers have done, Father Nolan explains. The decorations are always put up before the Easter Vigil and remain in place until Pentecost.