Books for hospitalized kids is goal for St. Aloysius student 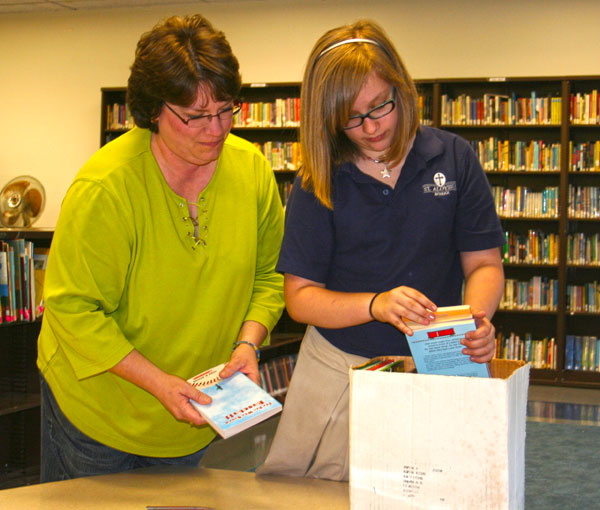 She may be young, but Mackenzie Newhouse is already a girl with a mission. At just 12 years old she has founded a charity that helps hospitalized children. She calls her charity Mackenzie’s Pages of Hope, or MPoH.

“I love to help people and I love to read,” says Mackenzie, who is a sixth-grader at St. Aloysius School in Springfield and an avid reader. “I came up with an idea to incorporate both of those loves — to donate new books to St. John’s Children’s Hospital so every child admitted will have a book to help make their stay more enjoyable. I want all kids to love reading as much as I do and I know that if I was in the hospital, a book would make me happy.”

Mackenzie first came up with the idea of donating books when she was contemplating a project for Girl Scouts. She and a few of her friends were going to give some of their own books to St. John’s, but found out that the hospital could only accept new items. That’s when Mackenzie, with the help of her mother Stephanie, began gathering new books to donate. She has also asked other people to help.

It took two years, but just before Christmas 2009 Mackenzie, accompanied by her mother and her younger brother Keagan, made their first donation of 80 books to St. John’s. Mackenzie made a second donation of 60 books in February. Since the majority of children who are hospitalized there are third-graders or younger, Mackenzie tries to offer books that are meant for younger readers.

Many times donors will buy books and give them to Mackenzie to deliver. Sometimes people donate money.  She tries to read each donated book so she knows what the children are getting. Her father, Troy, says she can read almost any book in practically no time at all.

“It’s kind of fun to pick out the books,” Mackenzie says. “I read them, sort them by age groups and then we put labels in the books with the mission statement and the name of the charity.”

When teachers and parents agree, Mackenzie and her mom staple a request to book order forms to ask that parents who buy Scholastic Books get extras to donate. “For only $5 you can buy five $1 books and help me have enough books for my next donation,” she says. That way, the child’s classroom also gets the extra benefits from Scholastic.

Mackenzie says she is exceptionally grateful to two St. Aloysius teachers, Emily Docktor and Deann Reavis, who have been especially helpful in her book-gathering campaign — and to her principal, Jean Kennedy, who is also supportive of her cause. Additionally, she thanks students at Christ the King School in Springfield, who recently held a “dress down day” and raised $492 for MPoH.

Stephanie Newhouse says her daughter has always been concerned about the well-being of others. “We’re very proud of Mackenzie, but what she’s doing is par for the course for her. For example, the day before her fourth birthday was 9/11,” she says. “It was all over the television and she kept seeing how the Red Cross was helping. She had a stand and sold red, white and blue Kool-Aid and we took the little bit of money she earned to the local Red Cross. They asked her to participate in the Hero for the Red Cross program and she raised over $1,500 and received the Red Cross Youth Leadership Award when she was 5 years old.”

Although Mackenzie is already spending about 15 hours a month on her MPoH charity, she looks forward to expanding to more hospitals. For example, a “Twitter” friend in Naperville is collecting books that will hopefully be donated to Children’s Memorial Hospital in Chicago.

“I have a goal,” she says. “I eventually want to provide books to all 177 Children’s Miracle hospitals in America.”