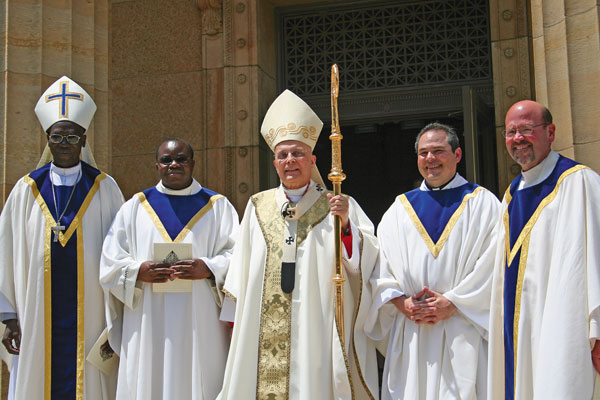 It was a lovely day both outside and inside the newly-restored Cathedral of the Immaculate Conception in Springfield on the morning of Saturday, May 29, as Cardinal Francis George, OMI, of Chicago ordained Wood River native Father Stephen A. Thompson and Ghana, West Africa native Father Paul Kala to the diocesan priesthood.

The priests’ ordination was attended by Archbishop Gregory Kpiebaya, the archbishop emeritus of Tamale in Ghana, dozens of priests as well as hundreds of lay supporters and took place a little over three weeks prior to the installation of Bishop Thomas John Paprocki as the ninth bishop of the Diocese of Springfield in Illinois.

In acknowledgement of Msgr. Carl Kemme’s work as diocesan administrator these past 11 months, Cardinal George asked Msgr. Kemme to deliver the homily. While addressing the congregation Msgr. Kemme noted that Father Thompson and Father Kala were to be ordained just prior to the close of the Year for Priests. 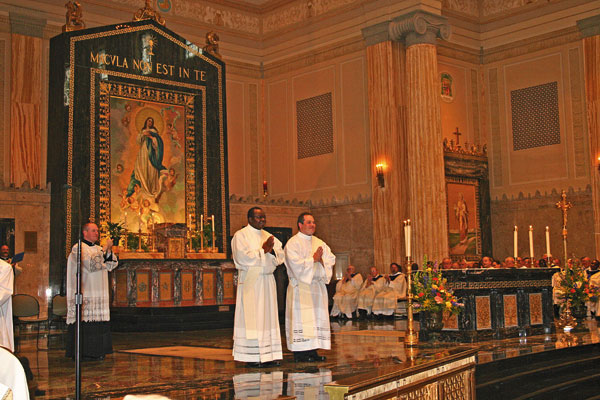 “Many times during this year, Pope Benedict XVI has held up St. John Vianney, the Curé of Ars, as a model of the priesthood,” said Msgr. Kemme, noting that from the beginning of the saint’s priesthood, he worked hard to save souls.  “… as a priest St. John Vianney rolled up his sleeves and won soul after soul for Christ,” he said.

“My brothers Stephen and Paul, today you stand at the beginning of your priestly life. Today you entrust the remainder of your lives to Christ,” he said. “I pray, Paul and Stephen, that you rarely utter the words, ‘No, I won’t.’ For only in surrendering completely and totally to his will, will you know freedom.”

To the longer-ordained priests, Msgr. Kemme said, “My brother priests, these men here to be ordained are a gift to us … a great gift never to be taken for granted.” He then urged the new priests to “put your hands to the plow for Christ.”

Msgr. Kemme asked that all priests pray especially to Mary. “As we gather today, no one rejoices more than our Blessed Mother,” he said. “She truly is the mother of God and she is the mother of priests. In pleasing her, we please Christ her son. May Paul and Stephen, as new priests, receive Mary’s mantle of loving protection.”

After the homily, Father Thompson and Father Kala each made their promises to the priesthood and lay prostrate in the sanctuary while the assembly prayed the Litany of the Saints. The ordinations also included the laying on of hands by Cardinal George and the priests and the prayer of ordination just before the two men received their chasubles. 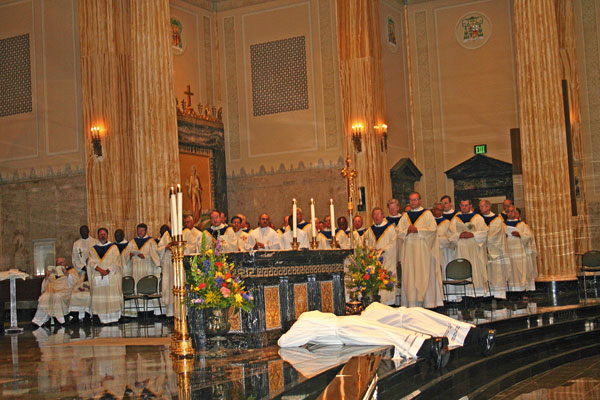 As the ordination ended, Cardinal George spoke informally to the congregation, and asked the two new priests to give him the traditional first blessing. Following Mass Father Kala and Father Thompson stepped out on the steps of the cathedral, where they were greeted with the joyous applause of their fellow diocesan priests. They gave their blessing to many who had gathered in their support and then attended a reception in their honor in the new Cathedral atrium.