State Knight, Lady of the Year both from Highland Council 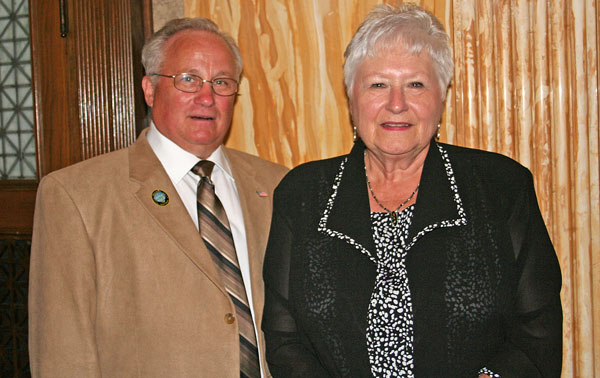 Dave Gall was honored with the Illinois State Council’s Knight of the Year award and Darlene Rehkemper, wife of the late Knight Rich Rehkemper, was named State of Illinois Auxiliary Lady of the Year. Both are affiliated with Highland Knights of Columbus Council 1580.

Gall was recognized for his outstanding support to his council, church, community and family. He joined the Highland Knights in 1979 and became a Fourth Degree Knight in 1982.

Additionally, Gall participates in the annual Life Chain, is a regular participant with the Knight Time Singers who perform at local nursing homes, and works with families at the children’s Easter and Christmas parties.

Because Gall believes in building up the number of Knights, he received a membership award from the Supreme Council for signing up 20 new members in 2000. He has previously served as assistant vocations director and district deputy. He is past Grand Knight, past member of the council’s degree team and is past president of the Columbus Club. He now serves as recorder for the council. He is past Faithful Navigator of Highland Fourth Degree Assembly 231 and also currently serves as comptroller.

Gall and his wife, Chris, have been married for 43 years and are now retired. They have three grown children. He credits her with being a partner in much of his volunteer work. They regularly attend corporate communions and participate in funeral home visitations.

“We were born on the same day in the same year. Now we work on so many things together that we’re practically attached at the hip,” Gall says. “In fact, the same month I was named Knight of the Year, Chris was named Lady of the Month for our council.” He says he can’t really keep track of all of his K. of C. activities, but he’s participated in just about everything the Knights have promoted.

Rehkemper has been equally as busy. Among other activities, she is past president and currently holds the office of trustee for the Ladies Auxiliary. She participates in the annual Knights of Columbus living rosary, funeral home visitations and corporate communions.

She assists at nearly every Knights of Columbus event, working at bingo and food stands, decorating the K. of C. hall, and generally helping out where she is needed. She participates in perpetual adoration at the local hospital and is a member of a Filipino prayer group that was formed to help Filipino people meet others in the community.

Rehkemper provides transportation for elderly friends and neighbors to doctor appointments and entertainment functions. At her parish, she is an extraordinary minister, takes Communion to shut-ins, leads the rosary once a week, participates in Bible study and a ladies prayer group and is involved with Cursillo. She is a member of the St. Paul Church Art and Environment Committee, where she sews banners and helps decorate the church.

Because she enjoys spending time in the kitchen, Rehkemper bakes and donates cakes and pies for dinners and fund-raisers. “I make my angel food cakes from scratch and they are really good,” she admits. “I just love to bake.”

Rehkemper says that over the years she has learned helping others is a positive way to deal with personal grief. When Darlene and Rich lost their 20-year-old son Ronnie in an accident in 1989, the couple was naturally devastated. However, volunteer work helped them find their way through the pain, Darlene says.

Together Rich and Darlene, who were farmers, contributed to and chaperoned at HIS KIDS summer camp for children with cancer and other related childhood diseases. Additionally, they traveled to help Hurricane Andrew victims in Florida in 1992. “I also visited accident victims,” Darlene says.

She adds that she and Rich also have three daughters and seven grandchildren who grew up close by. “We did a lot as a family, so those kids will always remember the happy times we spent together,” she says. “That is so important.” A great-grandchild is due later this summer.

The last few years have also been difficult for Rehkemper, who lost her husband of 46 years to cancer in 2004, her mother in 2005, and her father — who lived with her for last few years of his life — in 2008. After caring for her loved ones for many years, Rehkemper found herself once again with a heavy heart and extra time on her hands. Now she tries to stay busier than ever.

“I’ve found that helping others and keeping busy really does make you feel better,” Rehkemper says. “I guess it is my therapy.”