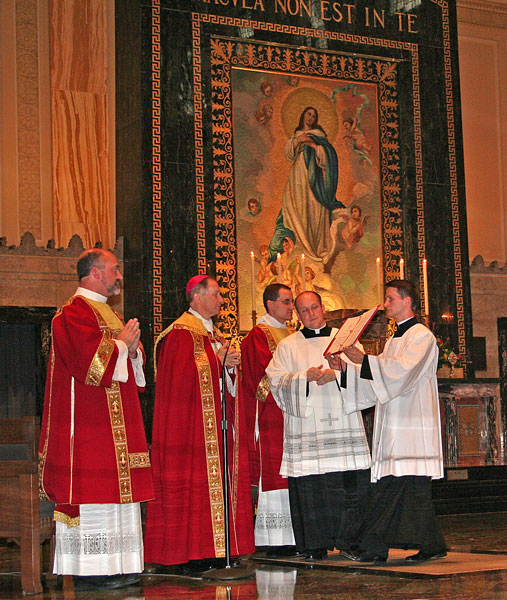 On the night before he was installed as bishop of the Diocese of Springfield in Illinois, Bishop Thomas John Paprocki was joined in Evening Prayer at the Cathedral of the Immaculate Conception by a cardinal, several bishops, Msgr. Carl Kemme, priests, deacons, seminarians, many members of his large family, hundreds of Catholics from all over the diocese, as well as ecumenical, interfaith, government and civic leaders.

Evening Prayer is part of the daily Office. When evening approaches and the day is nearly spent, it is celebrated to give thanks for what has been given us, or what we have done well during the day.

In his homily that evening, a smiling Bishop Paprocki said it was “a joy” to be united with all who had gathered there with him.

“On this eve of my installation as the ninth Bishop of Springfield in Illinois, I am pleased that you have come to join me in prayer, asking God to help me carry out my new responsibilities,” he said. “I look forward to spending time with you, getting to know you, listening to you and learning how to be a good bishop for you.”

Referring to the special assembly of bishops of the United States that he attended earlier in June, Bishop Paprocki said they had addressed the topic “The Bishop as Agent of Hope for His Priests.” In recalling that meeting he said, “I hope to be such an agent of hope for the priests of the Diocese of Springfield as a father, a brother and a friend to you.”

To the ecumenical leaders he said, “I am hopeful that we fellow Christians can find ways to work towards Christian unity to fulfill the prayer of our Lord and Savior, ‘That all may be one’ (John 17:21). I look forward to collaborating with leaders of all faiths to promote the virtues of religion and the values that we hold in common.”

Although Bishop Paprocki is a civil lawyer and greatly admires Abraham Lincoln, he said he comes to Springfield “not as a political scientist, or lobbyist, or lawyer, but as a shepherd of souls. As such I seek first and foremost to have a pastoral relationship with you, and help to guide you in that most important relationship of all, our relationship with God.”

Bishop Paprocki admitted that he normally doesn’t like to talk about himself in his homilies. However, considering that he was speaking for the first time from the Cathedral ambo he took that opportunity “to fill in the blanks.”

“As a Polish-American, for me the most significant person in the hierarchy of the church was our great Holy Father, Pope John Paul II,” he said. “He was elected pope just five months after my ordination as a priest and he would serve as pope for the next 27 years of my priesthood, so obviously he had a great influence over my life and ministry. I am blessed that the Papal Letter appointing me bishop in 2003 bears his signature.”

He also acknowledged his religious mentors — the late Cardinal John Cody, the late Cardinal Joseph Bernardin, and Cardinal Francis George — as well as the bishops who have come before him in the Springfield diocese, Msgr. Carl Kemme, who was diocesan administrator for the past year, and his parents Veronica and the late John H. Paprocki Jr.

Music for Evening Prayer was provided by the diocesan choir directed by Nichol DelGiorno. Following the liturgy, hundreds of well-wishers joined Bishop Paprocki for a reception held in a large tent on the grounds of the Cathedral where many of them were photographed with the soon-to-be-installed leader of the Springfield diocese.