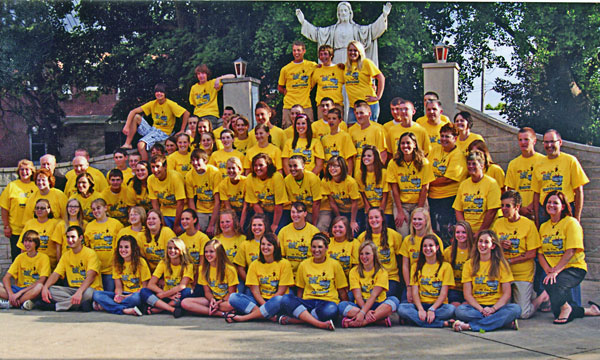 In a testament to their strong Catholic faith, 92 people from Teutopolis, Bishop Creek and Green Creek — teens and adult chaperones — traveled to Memphis, Tenn., earlier this summer to take part in a Catholic HEART Workcamp.

Most of the participants of the nearly week-long trip hailed from St. Francis Parish of Assisi Parish, said St. Francis parochial vicar Father Vernon Olmer, OFM, who was the priest who accompanied the group. He credits St. Francis youth minister, Lisa Siemer, with making sure interested young people get a chance not only to attend CHWC, but also to grow in their faith.

Taking nearly 100 people on a trip is no small feat, Father Vernon says, but Siemer is organized and does a good job with the youth. Siemer wants young people to be mature enough to travel a distance to help others. That’s why all the students who attended had at least finished their freshman year of high school. A few of them were out of high school and had gone on previous trips but still wanted to attend another HEART camp.

For Father Vernon, a senior citizen, traveling and working with the group was a challenge, too. “For an old man of almost 75, it tested my endurance,” he says with a chuckle. “I kind of broke my own rules. One day I told them, ‘Now it’s going to be hot today. Work slowly but steady and drink a lot of water.’ I realized by noon that I hadn’t been following my own advice … by afternoon I was about washed out!”

Most of the people from Teutopolis were assigned to clean up yards and paint older homes inside and out, although one group boxed up goods for a food pantry and other volunteers worked at a child care center. Some of the young people were working in a highly weeded area and their efforts led to an uncomfortable outcome. “One group got poison ivy,” Father Vernon says.

“I think of this as a camping/work retreat,” Father Vernon says. “When they pray, it is not the traditional mode of prayer that we old-timers are accustomed to. I thought Wednesday night was particularly powerful. They had four corners for prayer: one for forgiveness, one for healing, one for faith and one for others.”

All together, about 300 people were assembled in Memphis, which led to some challenges for Father Vernon. “I did have another priest there for reconciliation, which was a good thing. You know, I looked up at that long line that extended along the gym when they were all waiting and then I said to him, ‘We’ve got to keep them going,’” Father Vernon says. “We had to keep it short to get to all of them.”

Father Vernon says this is the second Catholic HEART Workcamp he has attended and he understands just how much can be accomplished by the youth around the country. The national program was founded in 1993 by Florida residents Steve and Lisa Walker. The theme of this year’s camps was “Cadence — Life with a New Rhythm!” By the time the trips end in August, all together 11,000 servants will have attended 2010 camps in 38 spots around the United States and one in Jamaica.

“Father Vernon was very gracious to take this trip with the youth,” says Maria Zumbahlen, an adult parishioner from St. Francis who also traveled with the group. “The best thing about this week for me is seeing the youth of our church very excited about their faith.

“The campers sleep on the floor at a Catholic high school, they get up early, work hard all day in the heat with other youth from across the country, go to Mass, eat together, and then enjoy an evening program which includes praise and worship music, witness talks, confessions, prayer share time and games.

“I felt honored to chaperone such a wonderful faith-filled group. All of us should be very proud of the youth in our area. Thanks so much to all who made this remarkable trip possible,” Zumbahlen says. “God is doing amazing things through Catholic HEART Workcamp. He is changing the hearts of our Catholic youth and the hearts of the many people served.”