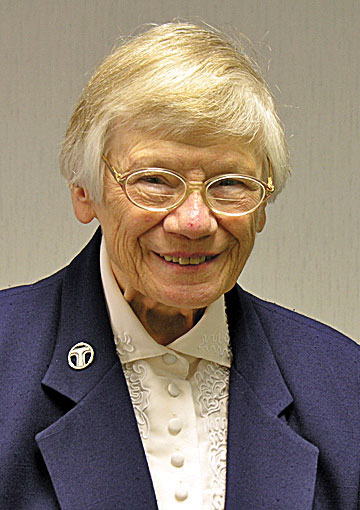 The former Charlotte Ann Bailey was born in Springfield on April 3, 1921, the daughter of Austin and Hazel Owen Bailey. She entered the congregation on Feb. 2, 1945, and professed her religious vows on Oct. 4, 1947.

Sister Ann was a graduate of St. John’s Hospital School of Radiologic Technology, St. John’s School of Medical Technology, St. Louis University, and Xavier University. She served the community as an X-ray technician, clinical instructor and administrator at hospitals in Illinois and Wisconsin. She also served in various administrative roles at Hospital Sisters Health System and her religious community.

In addition to her parents, she was preceded in death by a sister, Mary Lois Bailey.

She is survived by her cousin, Jane Brun, and her Franciscan sisters with whom she shared her life for over 65 years.

The Eucharistic Celebration and Rite of Christian Burial was celebrated by Father Vincent Callahan, OFM, on Aug. 16 in St. Clare of Assisi Adoration Chapel at St. Francis Convent. Burial was in Crucifixion Hill Cemetery.

Kirlin-Egan and Butler Funeral Home was in charge of arrangements.