Funeral Mass to be held for Father Corredato 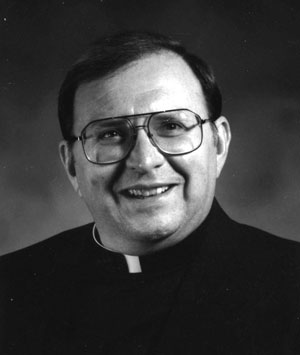 He was born in Springfield, son of the late Anthony and Bruna Gaio Corredato. He professed his first vows with the Clerics of St. Viator in 1960, and was ordained a priest in 1968. He held a bachelor's degree in history from Loyola University, Chicago, and a master's degree in religious education from the Catholic University of America, Washington, D.C.

After ordination, Father Corredato was assigned as associate pastor to St. Viator Parish and Guardian Angel Cathedral in Las Vegas, Nev. From 1971 until 1981 he served as associate pastor at St. Patrick Parish in Kankakee. He was then assigned to St. Viator Parish, Las Vegas, as associate pastor for one year. He was appointed as pastor at St. Joseph Parish in Springfield, where he served from 1982 until 1990. He returned once again to Las Vegas to serve as pastor of St. Viator Parish for five years. He then returned to his native Illinois to become pastor at St. Boniface Parish in Edwardsville, where he served from 1995 until July 2007. In September 2007, Father Corredato was assigned to Las Vegas as parochial vicar for Guardian Angel Cathedral.

He is survived by one brother James A. Corredato, and one sister, Mary E. Buckman; aunts and uncle, Atilio and Hilda Corredato and Della Gaio; several nieces and one nephew; great-nieces and great-nephews; numerous cousins.

In lieu of flowers memorials may be made to the Clerics of St. Viator in Arlington Heights; St. Viator Elementary School in Las Vegas, Nev; or St. Boniface Building Fund in Edwardsville.

Kirlin-Egan and Butler Funeral Home, Springfield, is in charge of arrangements.