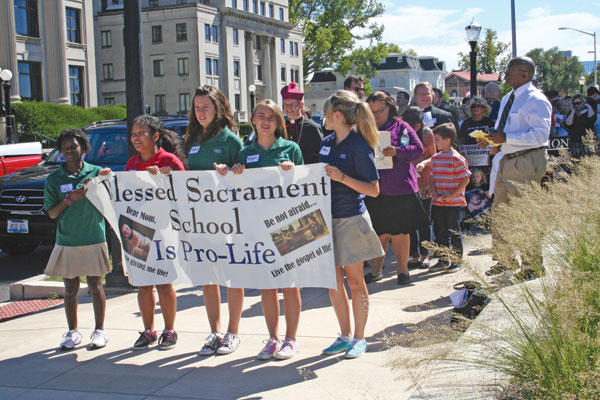 Just prior to the beginning of October, which is designated as a month to celebrate life, Bishop Thomas John Paprocki and hundreds of others welcomed pro-life activist Alveda King to take part in several events that were sponsored by the Office for Social Concerns, Springfield Right to Life and the Springfield Blessed Sacrament Parish Gospel of Life Committee.

King was in Springfield Sept. 23 and Sept. 24 to help bring her message of hope for the pro-life movement. On the evening of Sept. 23, she spoke to about 100 individuals at the Howlett Building in the Capital Complex.

King, 60, said she is driven by spiritual conviction to defend the unborn. A survivor with a difficult past, King received an abortion under false pretenses when she was a young mother of just 19 years old. In 1973, she underwent a second abortion at a Planned Parenthood Clinic. These two procedures damaged her cervix and caused her to miscarry another baby just months later. Eventually, her remorse over the abortions led to the end of her first marriage.

King explained that she married and divorced two more times before she accepted Jesus into her life in 1983. She is now the mother of six adult children and several grandchildren. She is also a former member of the Georgia state legislature and was appointed by President George H.W. Bush to be regional deputy for one of the regions of the U.S. Department of Education.

In 2004, King’s pro-life convictions led her to join forces with the national Catholic organization, Priests for Life. She is a pastoral associate for the organization, traveling the country preaching and rallying for life. The niece of the late Martin Luther King Jr., she is also the daughter of the late A.D. King, who was a high-profile leader in the civil rights movement. 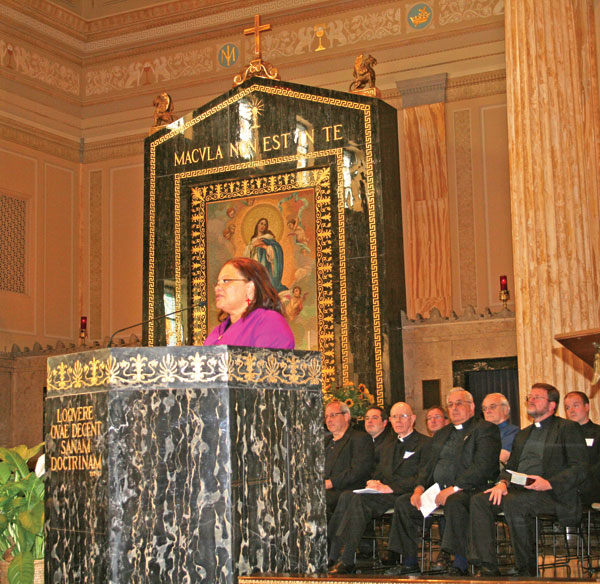 Dr. Calvin Bell, who along with his wife Deena, was instrumental in bringing King to Springfield, said it was a privilege to welcome King and to hear her testimony for life. “Dr. Alveda King is a nationally known speaker and tirelessly continues the civil rights movement begun by her iconic uncle years ago,” he said.

“The threat Dr. Martin Luther King fought was that of racism; his niece fights an even greater threat, that of abortion,” said Bell, who is a parishioner of Blessed Sacrament Parish. “Martin fought against denial of basic human rights for African Americans; his niece the denial of the right to live.”

“This year nearly 1,500,000 children will be aborted,” he said. “One third — 500,000 — of these abortions will occur in young black women despite the fact that they make up only 10 percent of our population. Three in five African American pregnancies will end in abortion. … Clearly African Americans are a targeted population.”

“Be angry and sin not,” King told those gathered at the Howlett Building. “A broken heart and a contrite spirit are very useful to the Lord.”

King said she doesn’t believe in abortion, even in the case of rape. “Rape is wrong but abortion is a second wrong,” she said. “And we all know that two wrongs don’t make a right.”

On Friday she was one of the main speakers at an afternoon ecumenical prayer service at the Cathedral of the Immaculate Conception and march to Planned Parenthood in Springfield. Like her uncle, Alveda King told the hundreds of people gathered in the cathedral that she also has “a dream.” “My dream is that many will choose life. … If we all do our part, then that is enough.”

As the pro-life individuals were ready to leave the church and march peacefully for life to Springfield Planned Parenthood, King reminded them, “For those who march, sometimes everyone doesn’t appear to be on your side, but God is on your side, so let us march with joy!”

In response to the march, Pam Sutherland, vice president for public policy for Planned Parenthood, was quoted in The State Journal-Register as saying “any patient who is considering abortion gets an ultrasound and we ask if they would like to see it.”

In his own response, Bishop Paprocki has stated, “If so, I welcome this change in Planned Parenthood’s policy, since this has not always been their practice. In light of this change, they should also have no problem supporting the Ultrasound Opportunity Act (HB 5743), introduced by 18 co-sponsors in the Illinois House.”

Bishop Paprocki has explained in the SJ-R and at the Anniversary Celebration for long-married couples that the Ultrasound Opportunity Act would require abortion facilities to offer a woman seeking an abortion the opportunity to view her baby in an ultrasound and would set standards for the quality of the ultrasound image. The facility would also be required to document the woman’s response to the offer, he said.

King’s official stay in the see city came to a close Friday night when she was the keynote speaker at the Springfield Right to Life annual benefit dinner.