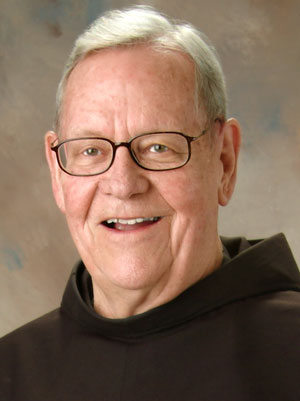 Father David R. Eckelkamp, OFM, friar priest of Sacred Heart Province of the Order of Friars Minor (Franciscans) died at the age of 80 on April 1 in the Hospice Unit of St. John's Hospital, Springfield.

He was born June 4, 1927, to William and Mary Ann Straatmann Eckelkamp in Washington, Mo. He entered the novitiate of Sacred Heart Province of the Order of Friars Minor on July 4, 1946, and received the name David. He was ordained a priest on June 29, 1953.

Father David became the personal secretary to the provincial minister from 1955 to 1969, except for one year (1960-61) when he served in a secretarial capacity at the OFM General Curia in Rome. During this time he lived at St. Anthony Friary in St. Louis and ministered as chaplain at the St. Louis Chronic Hospital and at other hospitals as well.

In the chapter of 1969 he was elected provincial vicar and served until 1975. From 1975 to 1991 he was the executive secretary of OFM English Speaking Conference, helping to develop its evolving structure and operation over the years and facilitating its interaction with the Capuchin, Conventual and TOR Conferences as well.

Father David was appointed numerous times by the Order's general council in Rome to serve as the "general visitor" for OFM provinces celebrating chapters of election. In 1985 he also served as one of the secretaries for the Order's General Chapter in Assisi. In addition, he was the general secretary and chair of the planning committee for the Order's historic plenary council held in Bangalore, India, in 1988.

Following his administrative responsibilities, he took a break in 1991 for two years as parochial vicar at Cross in the Woods in Indian River, Mich. Then he returned to St. Louis and took up various responsibilities: interim director of the Office of Friar Formation and assistant in the province's ministry for retired friars and also guardian and part-time parochial (senior) vicar at both St. Anthony in St. Louis and St. Francis in Oakville.

In 2002, Father David moved to Springfield to be chaplain at the motherhouse of the Hospital Sisters of St. Francis along with the late Father Barnabas Diekemper, OFM. Due to his health, he retired to Villa West in Sherman.

He is survived by  his brothers, William "Woody" Eckelkamp of Villa Ridge, Mo., John "Jack" Eckelkamp of Labadie, Mo.; many nieces, nephews, grand-nieces and grand-nephews, and his Franciscan family of the Sacred Heart Province.

Memorials may be made toward the care of the elderly Franciscan priests and brothers at Our Lady of the Angels, P.O. Box 2153, Springfield, IL  62705.