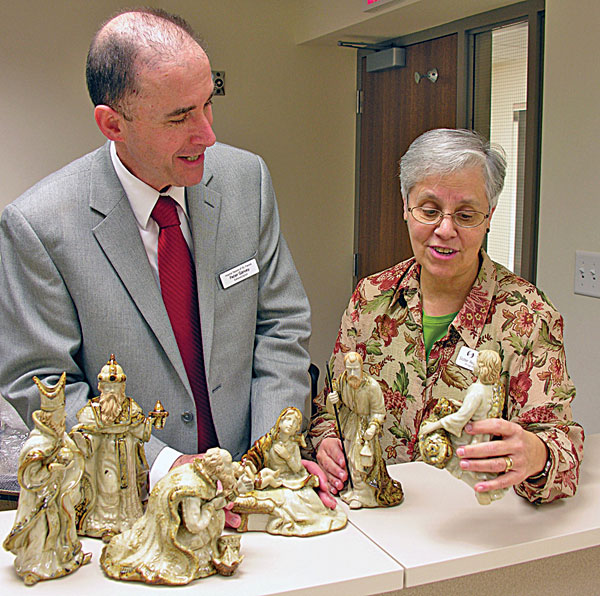 The festival is growing year by year, says Brian Blasco, director of communications for the Hospital Sisters. “We’re getting more visitors and we’re getting more people to enter the (Nativity) sets,” he says. “The sets come mostly from around the Springfield diocese, but some come from other places where the sisters have hospitals, so that would be as far away as northern Wisconsin.”

“The tradition of displaying a Nativity set in homes and churches all began in 1223 with St. Francis of Assisi in Greccio, Italy,” says Sister Renita. “Since that time, Christians throughout the world have interpreted the Bethlehem story with their own culture and traditions. Thus we see the internationality and the individuality of all Christians in this one beautiful moment when God became Man.”

This year’s festival includes unique Nativity sets that are representative of various cultures including Mexico, Haiti, Italy, Germany, Spain, Tanzania and the United States. “It is just really remarkable how the Nativity has taken on life around the world and how countries have been able to show how people look in their part of the world. Even the mangers look different,” Blasco says. “It is truly universal.”

The sisters will act as hostesses for the Nativity Festival, which is free and open to the public. Light refreshments will be served. Visitors to the festival will also tour St. Francis of Assisi Church, the 1920s Romanesque church of the Hospital Sisters.