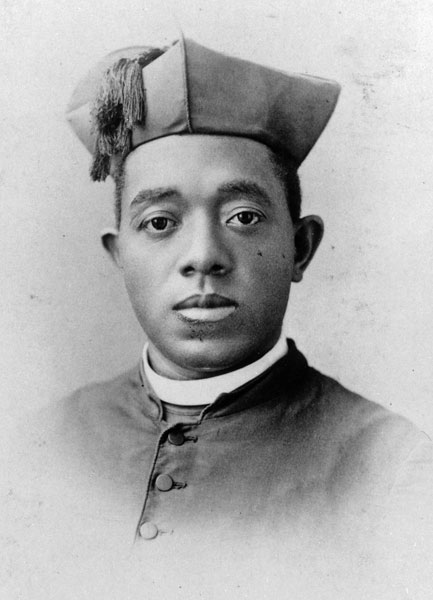 The sainthood cause of Father Augustine Tolton (also known as Augustus) remains in the diocesan phase — or phase I in Stage I — of examining the life of a candidate for sainthood, says Jeannine Marino, a canon lawyer and program specialist in the Secretariat of Evangelization and Catechesis for the United States Conference of Catholic Bishops.

Although Father Tolton lived most of his life in the Springfield diocese in Quincy, he died in Chicago, so that is why his cause for sainthood is being presented in the Chicago Archdiocese. “The cause for canonization always comes from the place where the person died,” says Marino. “That’s why the cause was opened in Chicago.

“Auxiliary Bishop Joseph Perry is handling the diocesan phase,” Marino says. “He is helping to present why Father Tolton lived a virtuous life.” In fact, Bishop Perry has already visited Rome to meet with Archbishop Angelo Amato, the prefect of the Congregation of Causes for the Saints since 2008.

Last June Bishop Perry presented Archbishop Amato with a summary of all the archival material gathered on Father Tolton so far: correspondence Father Tolton had with Mother Katherine Drexel, items from the Quincy archives, items from the Springfield diocese and a number of articles from newspapers in Chicago at the time in which Father Tolton was in Quincy and Chicago. He also presented the archbishop with two books:  The History of Black Catholics in the United States by Cyprian Davis and From Slave to Priest by Sister Caroline Hemesath.

Bishop Perry is in the process of forming two groups necessary to go forward with the cause: an historical commission to review documents and other material and to determine what further research has to be done, and a guild of laity and clergy to popularize the cause. The archdiocese is also forming a tribunal to hear witness and testimony on his heroic Christian virtues.

In October the Roman postulator, Dr. Andrea Ambrosi, visited the Archdiocese of Chicago to see Bishop Perry and personnel who will be working on this phase of the cause. On Nov. 10, Bishop Perry lectured on Father Tolton at the Catholic Theological Union in Chicago.

Once the diocesan phase is finished, the documentation is to be passed on to the Congregation for the Causes of Saints, where the public copy used for further work is assembled. In Rome, a postulator puts together a documentation called a positio that proves the heroic exercise of virtue (such as in the case of Father Tolton) or the martyrdom of a person, under the direction of a member of the congregation’s staff — called a relator. At this point Father Tolton is called “A Servant of God.”

In all, nine theologians vote on the positio and if the majority is in favor, the cause is passed on and examined by cardinals and bishops who are members of the Congregation and meet twice a month. If they are in favor of the cause, the prefect of the Congregation presents the results of the entire course of the cause to the pope, who then gives his approval and authorizes the congregation to draft the relative decree. There is then a public reading and promulgation of the decree and the “Servant of God” is called “Venerable.”

Stage II, or beatification, takes place after a miracle attributed to the intercession of the proposed saint takes place. This miracle must have taken place after death and must be proven through a canonical investigation and is concluded with the appropriate decree. Once the heroic virtues or martyrdom and the miracle are promulgated, the Holy Father decides on beatification and the candidate is then called “Blessed.”

Stage III or canonization requires another miracle, attributed to the “Blessed” and having occurred after beatification. After Canonization, of course, the person acquired the title of Saint.

Father Tolton’s road to sainthood may be long or short, Marino says. “Father Tolton’s sainthood cause is considered historical because it comes more than 30 years after his death. However, there is no time limit set once the cause is opened,” she says. “It can take a couple of hundred years or five or 10. For example, Mother Teresa’s cause is moving very quickly. But, there is no doubt that Father Tolton is very much a part of the living history of the Springfield diocese.”

Note: The proclamation and first session of the Canonical trial examining the life and virtues and reputation of holiness of Father Tolton will be held at 2 p.m. on Thursday, Feb. 24, 2011 in the St. James Chapel at the Archbishop Quigley Center at 835 N. Rush St. in Chicago. The public is invited.

Prayer for the Cause of Father Tolton

O God, we give you thanks for your servant and priest, Father Augustine Tolton who labored among us in times of contradiction, times that were both beautiful and paradoxical.
His ministry helped lay the foundation for a truly Catholic gathering in faith in our time.
We stand in the shadow of his ministry.
May his life continue to inspire us and imbue us with that confidence and hope that will forge a new evangelization for the Church we love.
Father in Heaven
Father Tolton’s suffering service sheds light upon our sorrows;
We see them through the prism of you Son’s passion and death.
If it be your Will, O God, glorify your servant, Father Tolton
By granting the favor I now request through his intercession
(Mention your request)
So that all may know the goodness of this priest whose memory looms large in the Church he loved.
Complete what you have begun in us that we might work for the fulfillment of your kingdom.
Not to us the glory, but glory to you O God, through Jesus Christ, your Son and Holy Spirit,
You are our God living and reigning forever and ever.
Amen.
Adapted from prayer services by Cheryl A. Cattledge for Tolton Pilgrimage