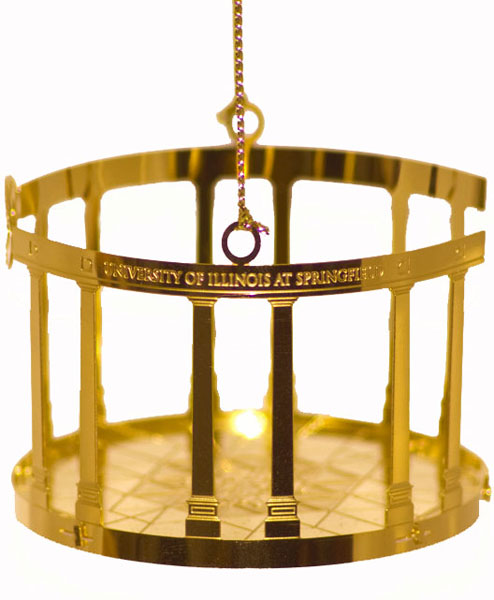 The 2010 ornament is the 18th collectible ornament in the series which depicts local landmarks and events. This year’s ornament is honoring the 40 years that UIS (formerly Sangamon State University) has been in Springfield. Founded in 1969, UIS has awarded more than 32,000 bachelor’s, master’s and doctoral degrees. The university has alumni living in all 50 states and 44 foreign countries.

St. Joseph’s Home, a not-for-profit nursing home established in Springfield more than 100 years ago, uses proceeds from the ornament to benefit the residence, says development director Terri Hempstead. “The ornament program supports the mission of St. Joseph’s Home, which has relied on the generosity of our Springfield benefactors since the ministry began in 1903,” she says. In its first 17 years, the ornament program has generated approximately $600,000 to support the home’s ministries.

“We hope this year’s ornament appeals to Springfield residents, SSU/UIS staff and alumni, and our series collectors all over the country,” Hempstead says. “It’s a beautiful and easy-to-mail gift.” She says that some collectors have every ornament released in the City of Springfield series.

Each 24-karat gold-plated ornament comes in a green velvet-lined box and includes a signed and numbered certificate of authenticity. The ornaments will be produced in a limited edition of 5,000 pieces.

The 2010 ornaments are available at St. Joseph’s Home at 3306 S. Sixth St. Road and are for sale for $26 each. They are also for sale for $29 each at UIS bookstore, Pease’s Candy Shops (four locations), Bank of Springfield (three locations), Heartland Credit Union (two locations), St. John’s Hospital gift shops, Pleasant Nursery, Wild Birds Unlimited, It’s All About Wine, Vono Medical Supplies, Illinois State Museum Store and Tinsley Dry Goods. They can also be ordered online at www.saintjosephshome.org or www.abelincoln.com.

The four earliest ornaments, depicting the Old State Capitol, Lincoln’s Home, the Dana Thomas House, and the Legend Rubbing Lincoln’s Nose, have been retired. The fifth through 17th ornaments in the series are available at St. Joseph’s Home, but not all other locations. Previous ornaments still available range in price from $20 to $26 each depending on their release date.

Earlier ornaments feature the State Capitol, the Main Gate of the State Fairgrounds, the Rees Memorial Carillon, St. John’s Hospital, Lincoln’s Tomb, several New Salem sites, the Presidential Library and Museum, the Lincoln-Herndon Law Office, Union Station, the Lincoln Bicentennial and the Cathedral of the Immaculate Conception ornament that was released in 2009 in honor of the restoration of the cathedral.