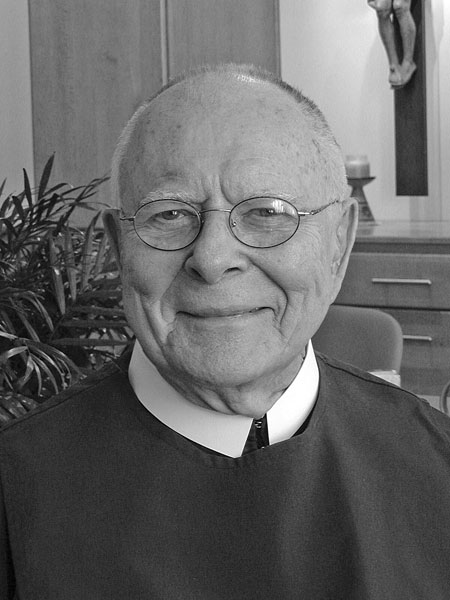 Brother Michael Groesch, 97, of the Franciscan Brothers of the Holy Cross died Dec. 11.

Brother Michael, the former George Vincent Groesch, was born in Springfield on July 26, 1913, the son of George Jr. and Amelia T. Fleck Groesch. He entered the Congregation of Franciscan Brothers of the Holy Cross on Sept. 17, 1946, and professed his religious vows on March 21, 1949.

Brother Michael graduated from Springfield High School in 1930. Following a seven-year work experience at Bunn Capitol Wholesale Company, he studied nursing with the Alexian Brothers in Chicago where he received his R.N. in 1943. He attended DePaul University, Chicago, Springfield College in Illinois, Quincy College (earning a bachelor’s degree in biological sciences), and earned an master’s degree from St. Louis University.

He served the community as a nurse, administrator, vocation director, novicemaster, and superior. He was principal of St. James Trade School. He worked many years in the field of special education as a teacher, care-giver, nursing director and assistant administrator. He trained and served in special education facilities in Chicago, Jefferson, Wis., and at Brother James Court, Springfield.

In addition to his parents, he was preceded in death by three brothers, Robert, Walter and Armin Groesch, and four sisters, Clara Mohay, Rose Groesch, Edith Midden, and Marie Lawless.

The Eucharistic Liturgy and Rite of Christian Burial was held Dec. 15 at St. Francis of Assisi Church at the Motherhouse of the Hospital Sisters of St. Francis near Springfield, with Father Vincent Callahan, OFM, as celebrant. Burial was in Resurrection Hill Cemetery of the Franciscan Brothers of the Holy Cross, Springfield.

In lieu of flowers, those who wish may make memorial contributions to the Franciscan Brothers of the Holy Cross at St. James Monastery, 2500 St. James Road, Springfield, IL 62707.

Staab Funeral Home, Springfield, was in charge of arrangements.