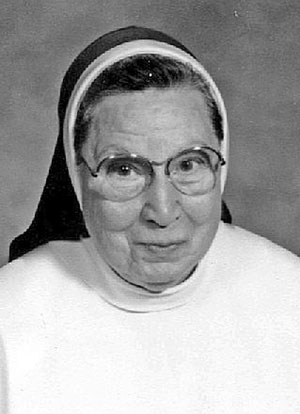 She was born in Springfield on March 9, 1907 to George and Ellen Tunney Suddes. After graduating in 1924 from Sacred Heart Academy she was accepted as a postulant by the Springfield Dominican Sisters in 1926 and professed her vows in 1929; she was a Loyola University graduate.

When Sister M. Imelda "retired" to the motherhouse in 1990, she assisted in the archives for four years. Finally she gave full time to her favorite hobbies: crocheting, reading, playing Scrabble or cards and watching her favorite sports: Notre Dame football and Cubs baseball.

Sister M. Imelda was preceded in death by her parents; her brothers Tom, George and Msgr. James Suddes; and her sister, Sister Mary Suddes.

She is survived by three nieces, four nephews, and by her Dominican sisters with whom she lived and ministered for 82 years.

Kirlin-Egan & Butler Funeral Home, Springfield, was in charge of arrangements.