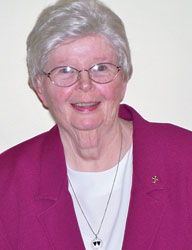 Sister Anna Marie was born to John and Hannah (Doherty) Mehigan in Chicago. She joined the Springfield Dominicans in 1955.

Before retiring, Sister Anna Marie’s ministry was serving as a hospital chaplain. She was a chaplain at hospitals in Springfield, Taylorville, Danville and Berwyn. Previously, she served as director of religious education in Oswego, Glendale Heights, Midlothian and Dundee, and she also taught at religious education centers in Hampshire, Hillsboro, and Arcola. During her first 20 years as a religious sister, she taught at parish schools in Springfield, Chicago, Granite City and East Moline in Illinois and in Duluth, Minn.

Sister Anna Marie was preceded in death by her parents and a brother, Owen. She is survived by her sister, Sister Margaret Mehigan, OP, of Adrian, Mich., and her brother, John, of Washington, D.C.