Are you being called? 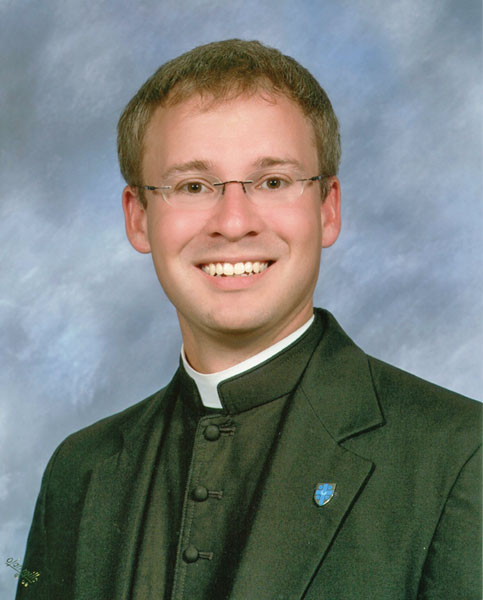 Even before he was ordained a priest for the Diocese of Springfield in Illinois in 2005, Father Daren Zehnle was dedicated to helping young people learn about religious vocations. That’s why he feels so at home in his newest dual role as episcopal master of ceremonies for the Springfield diocese, working with Bishop Thomas John Paprocki, and as the associate director for the Office for Vocations.

As associate vocations director, Father Zehnle will work with Father Christopher House, who has been director of the Office for Vocations since 2008 and was until recently episcopal master of ceremonies. Additionally, Father House has taken over as pastor at Father Zehnle’s former parishes, Holy Cross in Auburn, St. Patrick in Girard and Sacred Heart in Virden, and remains associate director for spiritual formation for the Office for the Diaconate and specialization director for the Office for Ministry Formation.

Father Zehnle and Father House began their new assignments in January.  Father Zehnle is in residence at Cathedral Parish but thanks to a busy schedule and the early February blizzard he is just now settling into his office at the Catholic Pastoral Center in Springfield.

Since he is in residence at the Cathedral, Father Zehnle will be helping out there as needed. “As other parishes have needed and as the bishop’s schedule allows, I have helped out,” he says. So far he’s also filled in at Masses in Petersburg, Auburn, Virden and Girard.

“As the master of ceremonies, when the bishop has a celebration somewhere, I go with him, just to make sure things run smoothly,” he says. “Every day is different because it depends on the bishop’s schedule.

“When the bishop has a confirmation at a parish we meet with the confirmandi about a half-hour beforehand,” he says. “He talks a bit about the vestments and a bit about vocations, too. And then I talk about, ‘How do you discern the call and how do you determine what the Lord’s calling you to do?’

“One of the reasons that the bishop has me as master of ceremonies and associate vocations director is so that if someone should be discerning a call to the priesthood or to the consecrated life, that they have an idea already of who’ll they’ll be talking to. It gets a face out there and connects it with a name and an office. So you won’t be just calling some random guy on the telephone.”

Father Zehnle knew by the age of 16 that he wanted to become a priest. That’s why he isn’t surprised that there seems to now be a growing interest in vocations among high school students. “I’ve always enjoyed working with high school age students. I’ve found them to be a delight.

“Their openness to the faith is there once you get them to start asking questions and you start answering them bluntly and directly, never sugar-coating an answer but just being straight-forward with them. Then the ministry there is endless. I don’t find it difficult at all.”

Father Zehnle says the goal of his travels with Bishop Paprocki is to start getting a culture of vocations to grow, “so that the idea of thinking about becoming a priest or becoming a nun isn’t some foreign concept out of left field.”

“One of my goals, and I’m sure one of Father House’s too, is to work more closely with the women who are vocation directors of religious orders. One of the difficulties is that young ladies aren’t always around nuns, so they don’t get to interact with them or experience what a full life they have as a religious,” Father Zehnle says.

“Part of the vocation goals is to get vocation directors out and about more across the diocese. If they never see us they aren’t likely to get the idea in their mind that ‘Maybe that is a good idea.’ So if we can be around them we can give them a sense of the joy and happiness that comes from following Christ.

“The idea is we want you to be open to it. We want you to really consider it. So if you think that the Lord might be calling you, we ask that you talk to us,” Father Zehnle concludes. “Talking to us doesn’t mean you’re in, you’re hooked. But we really want to help people discern what the Lord wants for them as well.”