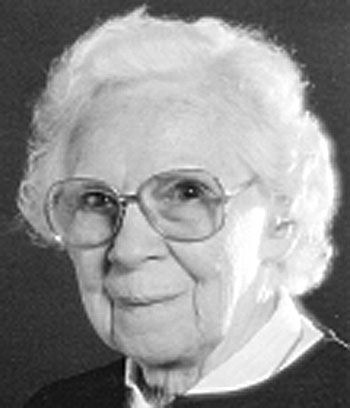 Born in Springfield on May 27, 1920 and named Mary Angela, she was the third youngest of Joseph and Helen Lex Knoedler’s nine children.

She was preceded in death by her parents; brothers John Francis, Joseph, William, Ernest and Msgr. Henry; sister, Eleanor Ermert; and aunt, Sister Irene Lex, OSU. She is survived by her brother, Robert, and sister, Helen, and many nieces and nephews.

She was a graduate of Ss. Peter and Paul School and Ursuline Academy. After a year of study at Springfield Junior College, she joined the Ursuline Sisters. She made her first vows on Jan. 16, 1942 in Crystal City, Mo. After that she earned a bachelor’s degree at the College of New Rochelle in New York and a master’s degree at St. Louis University. Later, with grants from the Argonne National Laboratories and National Science Foundation, she studied in Illinois, California, Oregon, and Tennessee.

Sister Beata began her ministry of education at elementary schools in Alton and Wood River. She was then assigned to Marquette High School in Alton and then to Ursuline Academy in Springfield. In 1958, she began her long and distinguished career as college professor of science and math at Springfield College in Illinois. She also mentored students in nursing, medicine, dentistry, chemistry and engineering and formed lasting friendships with graduates of the college.

Among the many awards Sister Beata received were: Alumna of the Year from Ursuline Academy; three times Teacher of the Year at SCI; the LaFata Endowed Chair at SCI; the Catalyst Award from the Chemical Manufacturers Association; the Magnificat Award from the Diocese of Springfield; and the Excellence in Lifetime Achievement Award from the Springfield Business Journal. A campus building at SCI/Benedictine University was named Beata Hall in her honor. In addition, Benedictine University awarded her an honorary doctorate and named the annual scholarship ball for her.

A Mass of Christian Burial, celebrated by Msgr. Thomas Holinga, was held Feb. 11 at St. Joseph Church. Burial was in Calvary Cemetery.