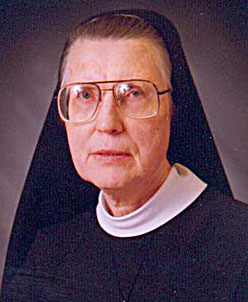 From 1954-1963, Sister Annunciate worked in the office in Niendorf and studied English spending time in London and Oxford, England. On Aug. 28, 1963, she went to St. Francis Convent in Alton and was a high school teacher at Rosary High School in North St. Louis County, Mo., for six years. For the next two years, she studied for a master’s degree in social work at St. Louis University. In 1971, she went to Mary, Queen of Peace Convent in Tulsa, Okla., and was a social worker for Catholic Charities. The following year, she was assigned to St. Francis Convent and did social work in the St. Louis area. From 1973-1987, Sister Annunciate was a social worker at Saint Anthony’s Hospital, Alton. From 1987-1990, she worked in the guidance department at St. Mary’s Regional High School, South Amboy, N.J. Sister Annunciate returned to St. Francis Convent in 1990 and did social work at Saint Anthony’s Hospital, Alton.

She is survived by two sisters, Renata Nazimek of Franklin, Wis., and Ingrid Strausse of Berlin, Germany; and a niece, Barbara Segal of Benton, Wash.

Staten-Fine Funeral Home, Alton, was in charge of arrangements.