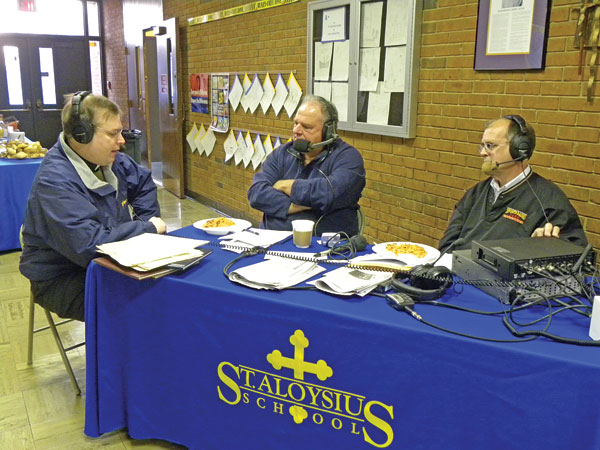 Father Tom Donovan, pastor of St. Aloysius Parish in Springfield, along with the faculty and students at St. Aloysius School recently welcomed some special visitors to their school.

Long-time local radio celebrities Sam Madonia and Jeff Hofmann were on hand Feb. 17 to broadcast the AM Springfield (Sports Radio 1450) radio program from the halls of the north-end school. They were on the air from 6 to 9 a.m.

Madonia and Hofmann are both familiar with St. Aloysius and were happy to visit, said principal Jean Kennedy. “Jeff Hofmann is in our parish and of course Sam grew up on the north end and attended St. Joseph School,” she said.

“We invited them here for several reasons,” said Kennedy, who arrived at school very early that morning to welcome Madonia and Hofmann for the live remote set-up. “The Catholic Schools in Springfield had open houses coming up so we promoted Catholic schools in general. We also talked about our school and our open house and we promoted the upcoming spaghetti dinner.”

While they were on the air Madonia and Hofmann interviewed St. Aloysius students and  their parents, their teachers, Father Donovan and several well-known St. Aloysius adult supporters. Even though it was early, the two radio personalities and visitors were offered sample plates of spaghetti along with other more breakfast-oriented treats. 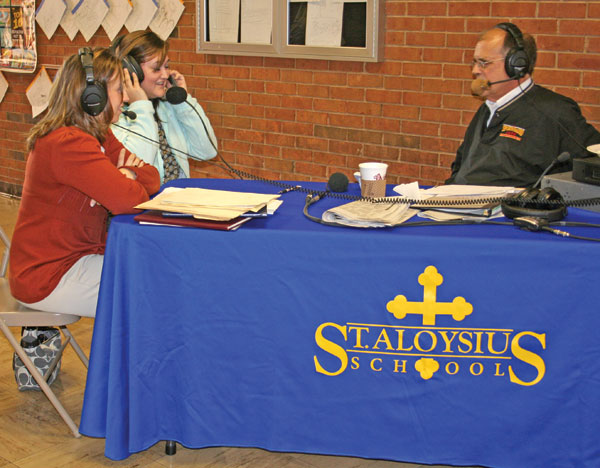 Both teachers spoke about how they treasure working in the Catholic school they attended as children.

“It is wonderful to teach here,” said Deann Reavis, who taught at the now-closed Ursuline Academy in Springfield before making the move to St. Aloysius several years ago. “And to top it all off, I get to walk down the primary hall and peek in on my child and I get to see my sister.”

Denise Reavis says, like most Catholic school teachers, she appreciates the positive values taught at Catholic schools like St. Aloysius. “You take those values with you,” said the 15-year veteran teacher. “I can’t imagine starting the day without being able to pray.”

“It was really fun to get Sam and Jeff to come here,” Kennedy said. “The parents in particular talked about how St. Al’s feels like a family. It was awesome.”