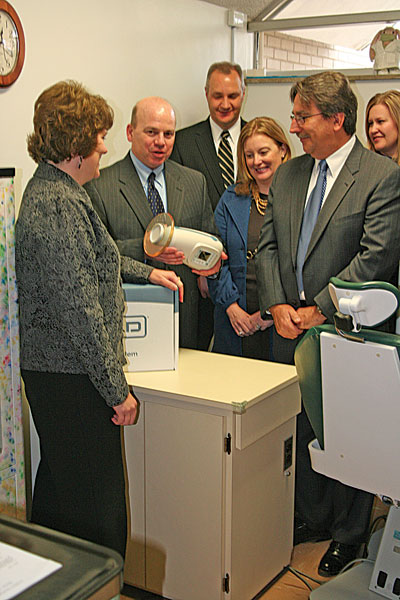 Members of the Westside Rotary were on hand at Catholic Charities’ St. Clare’s Health Clinic in Springfield Feb. 23 to see dental equipment purchased in part with funds donated by their organization and to receive a personal “thank you” from leaders of the health clinic.

“The clinic received a donation of $6,000 through the generosity of the Westside Rotary for the purchase of a portable dental X-ray machine,” said Carol Harms, community services coordinator for Catholic Charities, who showed off the equipment along with clinic supervisor Sarah Wright, RN. Harms said she particularly appreciates that one Westside Rotarian, Ed Hart, took the initiative to get the fund-raising started.

Hart said he first became aware of St. Clare’s dental service after meeting a young boy with dental problems. “Some members of the Westside Rotary mentor children at a local school one lunch time a month,” said Hart. “At the December 2008 visit, we brought in McDonald’s for the kids. ‘Joe’ chewed everything on the right side of his mouth and after one cringing taste of a French fry, he didn’t eat any more.

“I asked him what was the matter. He said he had a cavity. I asked him if someone was going to take him to the dentist. He explained to me how his dental card could only be used in a few places in Chicago and that no one could take him there. So, nothing was going to be done about it,” said Hart, who is in bank management and is a member of Blessed Sacrament Parish in Springfield. “The biggest shock to me was that at age 7 he knew about dental cards and their restrictions.”

The next month, when “Joe” still had the cavity, Hart talked to the school principal and then asked his wife, Clare Hart, if she was familiar with children who, like “Joe,” needed assistance. “My wife is a parent educator in District 186. She said it was quite normal,” Hart said. “My wife filled me in on many horror stories, but also recommended going to Catholic Charities if I wanted to try to help in any way because they are one of the few organizations that provide help.”

Hart called Harms with an idea. “I pitched an idea to our Rotary club about donating $1,000 to fill some kids’ teeth in a 12-month period. I figured we could start to help at least a few kids,” he said. “That worked out well. After that first year, I asked how much it would be to outfit an entire office, as during our first meeting Carol Harms said that was her dream.

“When clinic staff said that an X-ray machine was what would really make the major difference, I presented the idea of donating money for the X-ray machine to our Westside Rotary club. We donated $6,000 for the equipment. Then Catholic Charities was able to bring more to the table to make this an entire office.”

“The Westside Rotary support helped ignite a wonderful chain of events,” said Harms. “After the support of the Rotary, Catholic Charities held its annual Ultimate BBQ fund-raiser in September (2010). St. Clare’s Health Clinic was chosen to benefit from the donations received through the event’s fund-a-project.

“The BBQ raised $15,000 and that money purchased a sensor that makes the X-ray machine operable,” explained Harms, adding that there was $1,000 to spare for other necessary equipment. “We then received a donation from a retiring dentist in the Auburn area named Dr. Steve Hubbartt who gave us a significant amount of dental equipment to help us further our mission of serving low income families.”

Harms said that with the help of the Rotarians; Hubbartt and other donors; the G. V. Black Dental Society; and local dentists who volunteer their time, she has even bigger plans for the future. “Our vision is within a year to provide full-service dentistry with not only preventative but restorative care,” she said.