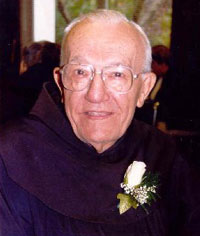 Father Melchior Toczek, OFM, Franciscan friar and priest of Sacred Heart Province of the Order of Friars Minor, died at the age of 88 on March 13 at St. Joseph Home in Springfield.

Father Melchior, whose baptismal name was Ladislaus, was born in Cleveland, Ohio, on Jan. 4, 1923, to Stanislaus and Victoria (Radon) Toczek. After his minor seminary training he entered the novitiate on Aug. 19, 1942, and received the religious name of Melchior, which he kept for the rest of his life. He professed first vows a year and a day later, and made solemn vows on Aug. 20, 1946. He was ordained a priest in Teutopolis on June 24, 1949, by Bishop William A. O’Connor.

After ordination he studied at Notre Dame University, taught two years at Quincy College, studied a year at Catholic University in Washington, D.C., and then was back at Quincy College for two more years. Following a two-year stint in parish work at St. Anthony in Columbus, Neb., he was back at teaching at Corpus Christi High School in Chicago for a year. Then he spent three years as the chaplain of Louisiana State Training Institute, residing at St. Paschal in West Monroe.

Beginning in 1962, Father Melchior taught science at Hales Franciscan High School in Chicago for seven years. After that he was back in West Monroe for a short period and then came back to Hales for two more years. He returned to parish work in 1971 and served at St. Roch in Indianapolis, St. John in Joliet, St. Mary in Madison, St. Stan in Cleveland, Ohio, and Immaculate Conception in Omaha, Neb., until in 1988 he became one of the chaplains at the county hospital in Oak Forest. In 2000 he did supply ministry out of St. Jude Parish in Cleveland.

In 2001 Melchior retired to Villa West in Sherman, to which he was attached for the rest of his years even though he lived his last days at St. Joseph Home in Springfield.

Father Melchior is survived by his sister, Joanne, in the Cleveland area and his nieces and nephews.

Father Melchior had requested direct cremation. His cremains will be returned to Cleveland for a Mass of Christian Burial at the Poor Clare Monastery (Rocky River) on April 2 with burial afterward in the Friars Plot of Holy Cross Cemetery in Cleveland. A memorial service was held in the Villa West Chapel in Sherman on March 20.