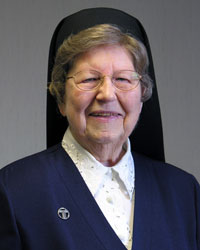 Sister Renelle, the former Clara Catherine Brueggemann, was born in Aviston on July 13, 1922, the daughter of Herman and Frieda Lueke Brueggemann.  She entered the congregation on Feb. 2, 1946, and professed her religious vows on Oct. 4, 1948.

In addition to her parents, she was preceded in death by a brother, Bernard Brueggemann.

She is survived by two sisters, Mary Gartside of Carlyle and Agatha Richter of Trenton; a brother, Paul Brueggemann of Smithboro; two nephews and several cousins, as well as her Franciscan sisters with whom she shared her life for over 65 years.

The Eucharistic Celebration and Rite of Christian Burial was celebrated by Father Andre Schludecker, OFM, April 5 in St. Clare of Assisi Adoration Chapel at the St. Francis Convent.  Burial was in Crucifixion Hill Cemetery.