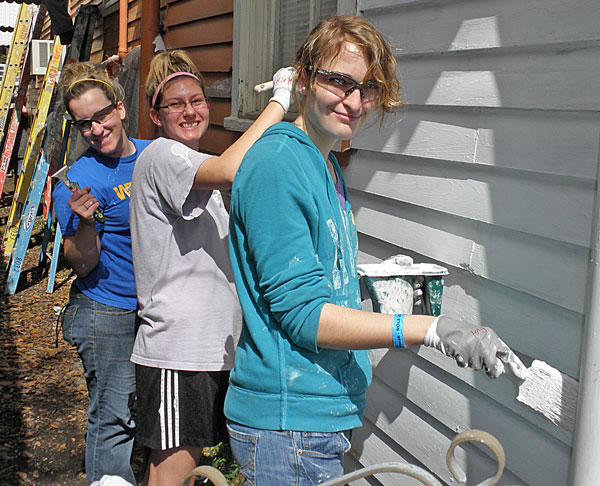 ALTON — In keeping with the motto “Serviam in Action” three-fourths of the seniors at Marquette Catholic High School in Alton left for New Orleans on Feb. 27 to spend several days working toward better living conditions there. The 31 students were accompanied by their principal Mike Slaughter, Marquette director of advancement Meg Miller, and nine parent chaperones.

The group met at a 6:30 a.m. Sunday Mass celebrated by Father Jim Walther, OMV, pastor of St. Mary Parish in Alton, and then left by chartered bus. Once in New Orleans, the teens and their adult leaders settled in quarters at St. Jude Center, which is right across the street from the National Shrine of St. Jude. They also separated into two work teams.

“One team worked with Catholic Charities and Project Helping Hands and the other worked for the St. Bernard Project,” says Miller. “We worked Monday through Thursday and each day the students worked from about 8 in the morning until about 4 in the afternoon. They painted houses, put up drywall, installed hardwood floors and completed many other projects.”

Students also met up with Daniel Stalcup, a 1981 graduate of Marquette, and his wife Jessica, who live in New Iberia, La. The couple made dinner and then drove several hours to deliver it to the group. “The dinner was fabulous with Jambalaya, crawfish cornbread, salad and the most amazing desserts,” says Miller. “Jessica named the chocolate cake she brought the Marquette cake because the students were the first to taste this new recipe.

“Just before we headed back home we met up with Sister Regina Marie and Sister Beth, who is a Holy Cross Sister from the St. Jude Center, to watch an early Mardi Gras parade from their spot on St. Charles Avenue,” she says. “The sisters saved a huge area for our group to watch the parade and explained much of the rich history of Mardi Gras to the students.” After the parade, the group boarded their bus for the long ride back to Alton.

Miller says students sold popcorn treats at Christmas, ran concession stands at the varsity basketball games and spoke in their respective parishes to raise money for the mission trip. “We always have a service project and have done other things, including mission trips to other places, but this is the third mission trip to New Orleans,” Miller says.

Students who made the tiring journey were glad that they were able to help so many people, and came home with a new appreciation for their home lives, Miller says.

“Seeing the homeless people come into the center to eat breakfast each day was tough,” says Matt McFarlane. “It made me thankful for all that I have.”

“This was an eye opener for me to see what some people have to live with,” says Kathryn Randolph. “I was glad to help the poor in New Orleans.”

Finally, Grace Lane hopes to take on another similar project in the future. “This trip made me want to come back and do more,” she says.