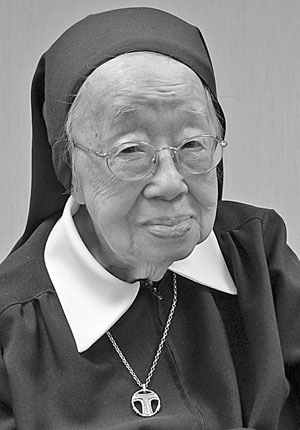 Sister Engelberta was one of the first six Chinese women to enter the Hospital Sisters' community in China. After their acceptance into the community in 1928, they came to America for formation and professional training. After her first profession in 1931, Sister Engelberta returned to China and began caring for the poor, working in a healthcare clinic, and visiting prisoners. When World War II broke out, all of the Americans in China were imprisoned. During that time, Sister Engelberta took charge of the pharmacy at St. Joseph's Hospital in Jinan, China. She returned to the United States on Jan. 27, 1949. From then on, she served the community as a seamstress in the motherhouse sewing room. She retired from her ministry in 1992.

In addition to her parents, she was preceded in death by a brother, Wen Ming Hu.

Sister M. Engelberta is survived by a niece and a nephew and her Franciscan sisters with whom she shared her life for over 78 years.

The Eucharistic Celebration and Rite of Christian Burial was celebrated by Father Vincent Callahan, OFM, on April 22 in St. Clare of Assisi Adoration Chapel at the motherhouse. Burial was in Crucifixion Hill Cemetery.

Kirlin-Egan & Butler Funeral Home was in charge of arrangements.