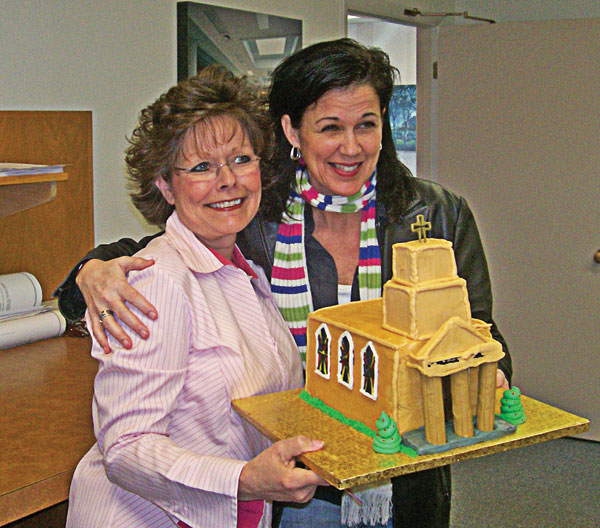 The entire staff of Graham & Hyde Architects Inc. in Springfield enjoyed a unique treat on April 5, when WQQL Cool 101.9 radio personality Amie Meneghetti delivered a specially-made cake to their office.

Janet Osmoe, administrative assistant for the architectural firm, won the cake by entering a “Just Desserts” contest that gives away one specialty cake a week to a listener who requests it for his or her office. Meneghetti, host of the Meneghetti in the Morning show, commented that Osmoe could probably pick any number of designs, since the architectural firm has been involved in designing so many buildings.

Without hesitation, Osmoe requested a Cathedral of the Immaculate Conception cake. “Of all the projects we’ve worked on, we are most proud of the Cathedral,” she said. Graham & Hyde was involved in restoration of the interior and exterior of the Cathedral, along with designing the new atrium, which is used as a large gathering space.

Tammy Mullins, who owns Specialty Cakes in Springfield, is in charge of coming up with one “Cool” cake a week. She said the Cathedral creation, which was a raspberry cake with cream cheese filling and butter cream frosting, was a bit of a challenge.

“We’ve only done one other church over the years … so this was something that was new to us,” says Mullins. “When Amie told me what they wanted, I thought ‘What? We better go look at that.’ Then I went down and saw it and thought, ‘Oh my goodness!’  We had to scale it down because it is such a massive church and we bake the cakes to serve 20 to 25 people. We included columns and steps, because that’s what struck me the most from the street.”

Osmoe says having the cake delivered was “really fun” and the cake was delicious. “I don’t usually care for sweets, but that cake was so good!” she says.

Now that she has baked and decorated the cake, Mullins says she wants to tour the inside of the Cathedral. “I’ve had people tell me, ‘Tammy, you really need to go see that church. It is so beautiful.’ Now I think I really need to see it for myself.”