Prayer to St. Michael to be restored in diocese 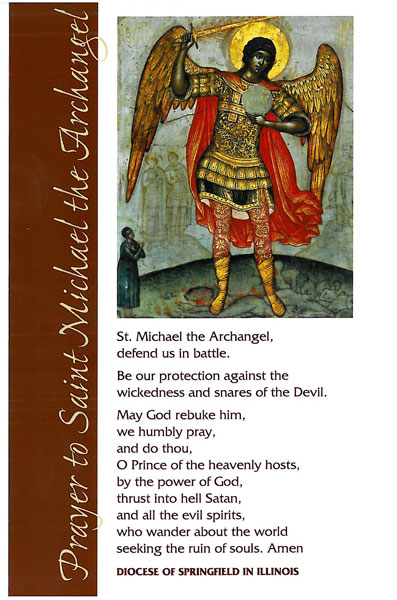 Bishop Thomas John Paprocki has authorized that beginning immediately the Prayer to Saint Michael the Archangel be said at every Mass celebrated in the Diocese of Springfield in Illinois after the dismissal and before the recessional or closing song.

“While Christ’s death and resurrection have restored the gifts of heavenly treasures for us, we also have to recognize that the devil, Satan, is real and he will do everything in his power to deflect us from our goal, which is eternal life on high with Christ in his kingdom,” said Bishop Paprocki.

“One of Satan’s greatest assets in his camouflage, (is) the belief that he doesn’t exist,” he said. “Disbelief in Satan and the forces of evil leave us unable to resist them. That is why it is good to remember the Prayer to Saint Michael the Archangel. We need to remember that each time we pray we work to defeat our real enemies, not each other, but rather the devil and his evil spirits.”

The Prayer to Saint Michael the Archangel was originally composed in Latin and was written by Pope Leo XIII in 1886. Between that time and 1965, it was recited after every Low Mass at Pope Leo’s order. However in light of liturgical changes made in the wake of Vatican Council II, the practice was discontinued as normative in the 1960s.

“In recent years, a number of parishes have begun reciting the prayer once more, and many individual Catholics have kept up the practice,” Bishop Paprocki said. “Both John Paul II and Pope Benedict XVI have urged the faithful to pray it daily, and especially after Mass.”

Bishop Paprocki spoke to the priests about using the prayer when he met with them on Tuesday, April 19, before the chrism Mass. Following the chrism Mass, large laminated prayer cards — with words to the Prayer to Saint Michael the Archangel on one side and a letter from Bishop Paprocki on the other — were distributed to delegations from each parish, along with the chrism and holy oils.

Bishop Paprocki asked that the prayer cards be placed in each pew along with other worship aids. The prayer cards were a donation from the Marian Center in Springfield.