Conform yourselves to example of Christ, bishop tells new deacons 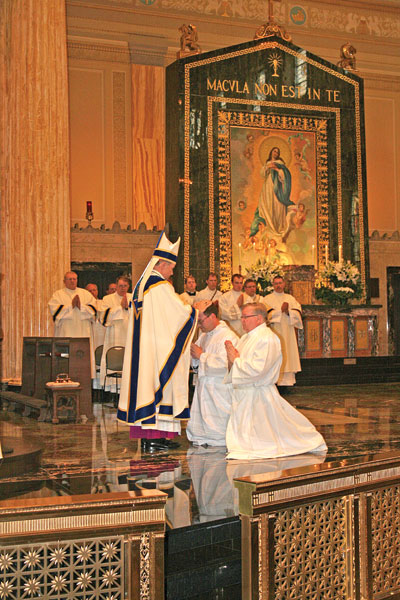 Both Deacon Allen and Deacon Edgar are third year seminarians and were ordained with the expectation that they will be ordained to the priesthood in 2012. During the ordination Mass, the two men were given the assent of the assembly, made a commitment to celibacy, promised to follow their vows, were vested with stole and dalmatic, and received The Book of the Gospels from Bishop Paprocki.

Bishop Paprocki said the ordination of the two men was especially appropriate because it took place on Saturday in the Octave of Easter. He began his homily by speaking about advertisements that, although not used to find seminarians, might be suitable for just that purpose.

“Perhaps you have seen the advertisement for the United States Marine Corps,” he said. “It says, ‘We don’t accept applications, only commitments.’ A few years ago, their slogan was ‘We’re looking for a few good men.’ I have long thought that whoever was doing ad copy for the Marines could have written the same ads for the Catholic Church.

“Today we celebrate a commitment of two good men to the diaconal ministry of the Catholic Church: Albert Allen and Zachary Edgar. In this ceremony, they will receive the Sacrament of Holy Orders, by which they will be ordained to the Order of Deacon as a transitional step toward their eventual goal of being ordained priests for our diocese next year.” 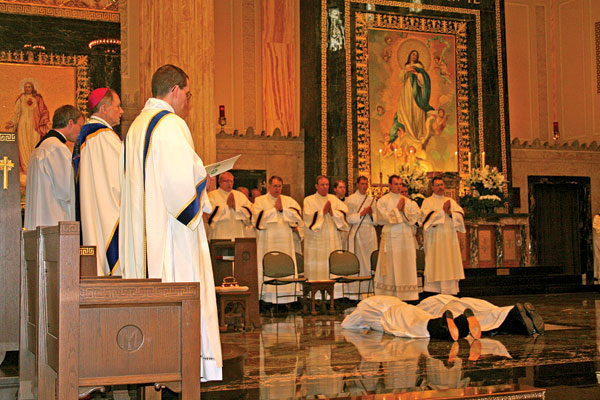 “The disciples did not at first believe Mary Magdalene and the two disciples on the road to Emmaus who returned and reported their encounters with the risen Lord,” he said. “Today, too, not everyone will believe the proclamation of the Gospel; still, it must be preached; ‘the joyful shout of victory must be heard in the tents of the just.’ (Psalm 118:15)

“Our new deacons will also need to drive out demons in Christ’s name, not only from the lives of the people that they will serve, but also from the temptations that the devil is sure to put before them as they are ordained ministers,” he said. “Christ himself was tempted by the devil in the desert and again during his agony in the Garden of Gethsemane, so we should expect to be tempted as well.

“As the Son of God, Jesus was able to withstand these temptations, but as weak human beings, we need Christ’s grace and the protective love of his Blessed Mother to shield us from the onslaughts of the Evil One,” he said. “We all need to pray and stay close to God, but deacons and priests need to be even more fervent and devout in the practice of the Catholic faith.”

In speaking to the soon-to-be ordained deacons, Bishop Paprocki said. “Al and Zach, the sacred vestments that will soon be entrusted to you are a constant reminder of the promise you will presently make ‘to conform your way of life always to the example of Christ, of whose Body and Blood you are ministers at the altar,’” (Ordination of Deacons) he said.

“Look to the example of the holy deacons St. Stephen and St. Lawrence, whose generosity earned them the crown of martyrdom and St. Francis of Assisi, who desired nothing more than to sing the praises of God and to know, with St. Paul, Christ crucified.”  (I Corinthians 2:2) 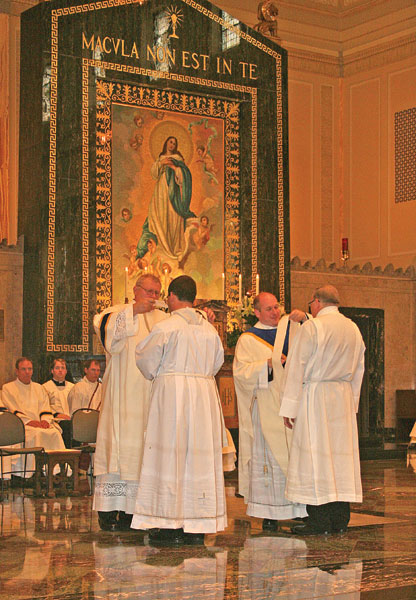 Finally, Bishop Paprocki spoke to the two men about the duties they will be assigned as deacons and about their vow of celibacy. “Firmly rooted and grounded in faith, you are to show yourselves chaste and beyond reproach before God and neighbor, as is proper for the ministers of Christ and of the stewards of God’s mysteries,” he said. “Never allow yourselves to be turned away from the Gospel. Now you are not only hearers of this Gospel, but also its ministers.

“You will also promise to celebrate faithfully the Liturgy of the Hours with and for the people of God and indeed for the whole world. This duty is not merely a daily routine, but another ‘little way’ (St. Therese of Lisieux) to keep your heart close to the Lord and to the people you serve,” he said.

“In the end, all of these ‘little ways’ are not just compliance with the law of the church, but the fulfillment of love, for as I say in my Episcopal motto Lex Cordis Caritas, ‘The Law of the Heart is Love.’”

Following the Mass, a reception was held in the two new deacon’s honor in the Cathedral atrium.

Deacon Allen and Deacon Edgar can now assist at liturgies, where they can proclaim the Gospel, preach at Mass and give the dismissal. They are also able to baptize, witness marriages, and preside at wake services and graveside services.