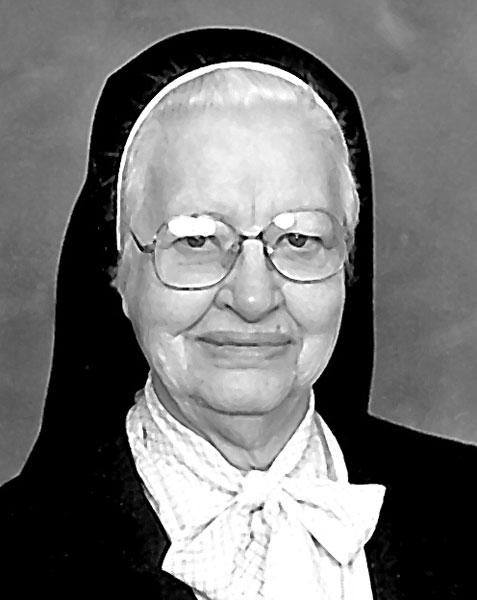 RUMA — Sister Eulogia Jansen, ASC, died April 16 at the Ruma Center of the Adorers of the Blood of Christ. She was 92 and had been an Adorer for 73 years.

She was born Frances Johanna Jansen on Oct. 26, 1918 on a farm near Albers, the middle child in a family of 11 of the late William and Margaret (Kloeckner) Jansen. A paternal ancestor was one of the founders of St. Bernard Parish in Albers. She entered the Adorers of the Blood of Christ Aug. 23, 1935. She was received into the congregation July 1, 1936, made her first vows July 1, 1937, and her final vows July 1, 1942.

Sister Eulogia earned a bachelor’s degree in 1955 and a master’s in education in 1962, both from St. Louis University. She had a lifelong dedication to the teaching ministry. Always preferring the first and second grades, she taught and served as principal and organist in Illinois in Bartelso, Chester, Olney, St. Rose, Salem and Cahokia. She was diocesan school supervisor for the Belleville diocese from 1967-1974. In Missouri, she served as an educator in Neier, Vienna, Zell and Kelso.

In 1992, after more than 50 years in the classroom, Sister Eulogia moved to Taylorville as assistant to the activities director for St. Vincent’s Hospital, serving there until 2000.

Preceding her in death were her parents; brothers Ludwig (also known as Louis), Albert, Raymond and Leo; and sisters Martha Varel and Estelle Heimann. Among survivors are her brothers Norbert and Edmund of Albers, and Vincent of Aviston; sisters Clara Schachner of O’Fallon and Marie Straeter of St. Rose; her ACS community, including her niece Sister Margaret, as well as many other nieces and nephews, including great-great-great nieces and nephews.

Memorial gifts may be sent to the ASC Retirement Fund, ASC Ruma Center, 2 Pioneer Lane, Red Bud, IL 62278 or made on line at www.adorers.org by clicking on “Support Our Ministries” on the left-hand column of the website’s home page.