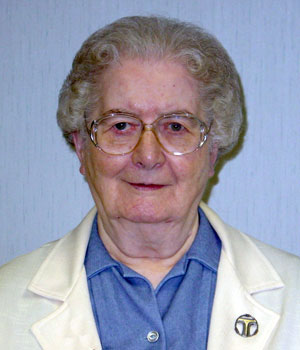 She was born in Newton on March 1, 1914, the daughter of Julius and Celestine Dallmeier Schmidt. She entered the congregation on Oct. 3, 1931, and professed her religious vows on May 3, 1934.

Sister Rosetta was a graduate of Fontbonne College in St. Louis, earning a bachelor's of science degree in 1939, followed by a dietetic internship at St. Mary's College until 1940. Sister Rosetta served the community as a dietitian at hospitals in Illinois and Wisconsin from 1941 until 1969. She was a dietitian at St. Joseph's Home for the Infirm and Aged in Monroe, La., from 1970 until 1975. She then served in pastoral care at St. Vincent Hospital in Green Bay, Wis., from 1976 until 1985. She was a receptionist at the switchboard of Hospital Sisters Health System from 1985 until 1988. She retired to the motherhouse in 1988.

In addition to her parents, she was preceded in death by four brothers: Raymond, Edgar, Florent, and Francis Schmidt; and three sisters: Marzella Wychoff, Mildred Mattingly, and Adeline Aldridge.

She is survived by a niece, Beatrice Weatherford, and a cousin, Father Michael Dallmeier, and her Franciscan sisters with whom she shared her life for over 76 years.

The Eucharistic Celebration and Rite of Christian Burial was celebrated by Father Vincent Callahan, OFM, on April 29, in St. Clare of Assisi Adoration Chapel at the motherhouse. Burial was in Crucifixion Hill Cemetery.

Kirlin-Egan & Butler Funeral Home is in charge of arrangements.

Read 1012 times
Tweet
Published in Obituaries
More in this category: « Funeral Mass held for father of Father Schulte Funeral Mass to be held for Father Corredato »
back to top
Joomla SEF URLs by Artio
Click here to read the latest Catholic Times
+