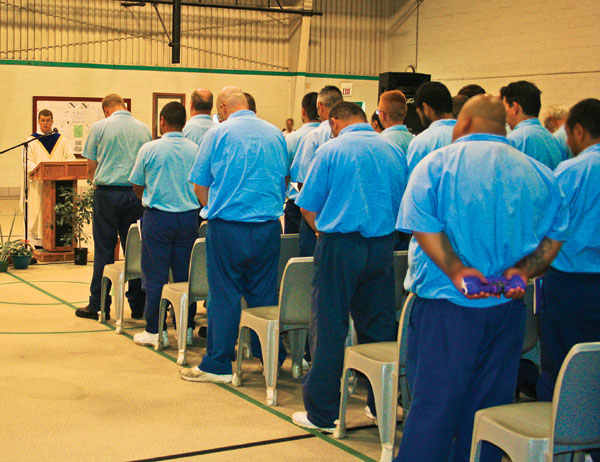 “My father did not want me to cater to the whims of the wealthiest members of the church, but instead to be among the poorest and the most powerless,” says Father Willenborg. “Each time I enter the prisons, I feel that I am keeping that promise and fulfilling my father’s wish.”

Father Willenborg, who is pastor of St. Louis Parish in Nokomis, began working in the Taylorville prison about five years ago when he was parochial vicar at St. Mary Parish in Taylorville. Father Willenborg’s ministry was expanded to Hillsboro when he moved to Nokomis. At that time the Hillsboro chaplaincy had been vacated by the recent reassignment of Father Jerry Bunse.

Father Bunse helped out in Hillsboro for a year or so following the retirement of Father George Morelock, who was chaplain at the correctional facility for 28 years. “I was also chaplain at the Jacksonville Correctional Center from 2004 to 2008,” says Father Bunse. “I enjoyed doing it. It was humbling. You know, we’re supposed to take the sacraments, especially the Eucharist, to the imprisoned.” 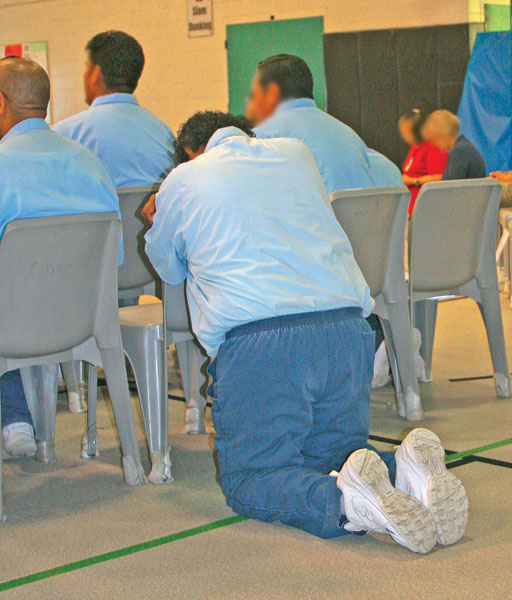 Father Willenborg travels to Taylorville on Thursdays and to Hillsboro on Saturdays, taking with him sacramental wine and hosts along with devotional items. Just like any other visitor to the prison he is “patted down” and goes through a screening process.

“I am on-site with the inmates approximately two hours at a time. I celebrate Mass and spend time with them,” he says. “Some want me to hear their confession, especially during Lent and Advent.

“I have never felt in any way threatened by the residents,” Father Willenborg says. “The vast majority of them take their faith seriously and for many, the time spent with a chaplain is a way to return to their faith. They are coming back to the church to find strength and spiritual rehabilitation. It is a blessing to see them come to Mass.”

Lynn Dexheimer, acting warden at the Taylorville Correctional Center, says Father Willenborg is always a welcome presence at the facility. “We’re very fortunate to have Father Dan here for the offenders,” he says. “He is a very caring individual. We can’t say enough about all that he does here — it speaks very well for the Catholic Church.”

Since priests in the Springfield diocese usually have many parishioners, several parishes or churches and schools to attend to, the time they could be spending in prisons is limited. That’s why Father Willenborg believes more Catholic laypersons, like Terry Tuttle, a parishioner at Blessed Sacrament Parish in Springfield who travels to help out in Taylorville, should volunteer to spend time with the prisoners.

“I would definitely encourage people to volunteer in the prisons,” Father Willenborg says. “I know this ministry has helped me to realize and to fulfill my mission. The call to this ministry has great value and there is a dire need for it in this diocese.”

He is also concerned about what happens to prisoners after they are no longer incarcerated. “I am becoming more aware of services, especially Kolbe House (the Catholic Jail Ministry of the Archdiocese of Chicago) that helps out when they are released,” Father Willenborg says. “My hope is that we (in the Springfield diocese) can begin to provide services once they leave.”

Father Willenborg says the more time he spends with the prisoners the more he realizes the importance of his ministry. “The inmates are among the most spiritually as well as physically poor in our society. These men have been stripped of almost everything, including their dignity.

“Society deems them as unworthy of any dignity. Yes, they have committed crimes and some of the crimes are most heinous,” he says. “Society would say they do not deserve anything. And maybe they don’t. But neither do I.

“Jesus came to those who had no dignity. He went among the criminals, the outcasts, the poorest of the poor. And he loved them,” Father Willenborg says. “He offered them forgiveness and reconciliation. He gave them hope, and for doing this he was labeled a sinner and a criminal.”

When visiting the imprisoned, Father Willenborg hopes to continue doing the work his father recommended. “It is my hope, in some small way, I can offer these men a glimpse of the mercy of Christ and that I can keep my promise to my father,” he says.