CHWC participants asked to give from the HEART 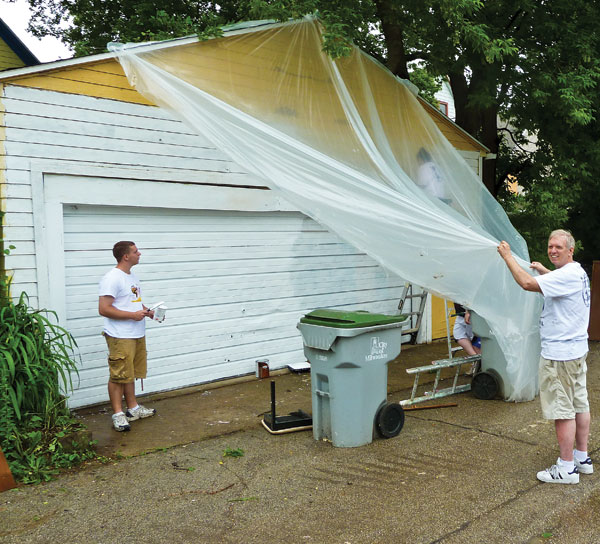 “Every now and then you have an experience, one that will remain with you forever — purposeful, fun and challenging,” says Maria Zumbahlen of her recent week chaperoning and taking part in Catholic HEART Workcamp (CHWC).

Zumbahlen was one of 93 Workcamp participants from Teutopolis-area parishes that went to Milwaukee, Wis., in late June. She says the group was there to “grow in their faith and to serve others.” “Wow, what a great group of teenagers we had!” she adds.

“We had two chartered buses,” Siemer says. “That’s how we decided how many could come. We ended up being a third of the camp in Milwaukee.” They worked on home renovations and in daycares and soup kitchens, assisting the elderly, the underprivileged and people with disabilities.

As it turned out, Father Dean Probst, pastor of St. Jude Parish in Rochester, was one of the adults who also led a group of 20 young people and nine adults that went to Milwaukee. Father Probst celebrated daily Mass for the group and worked on a project as well.

“I’ve gone to Catholic HEART Workcamp a number of times,” says Father Probst. “This was an excellent camp. I really think that this was one of the best Workcamps that I’ve been to over the years.”

Also in June, Sacred Heart Parish in Effingham sent a group of 16 youth and four adult chaperones to CHWC in Chicago. “We were joined by 220 campers from 11 other parishes from seven states,” says Kate Pruemer, youth minister at Sacred Heart.

“Participants from all the parishes were mixed together and split into work teams of approximately six people for the week, which provided a great opportunity to meet Catholic youth from other parts of the country,” Pruemer says. “The work teams were then sent out to impoverished areas across the city of Chicago.

“Our work projects included a wide variety of things such as helping at homeless shelters, painting and cleaning houses for the elderly, pouring concrete for a new sidewalk, doing yard work for the disabled, and caring for children at a daycare for poor families.

“We spent most of the day at our service sites Monday through Thursday,” Pruemer says. “We also a had high energy program every morning and evening that included great music, skits, cool videos, fun, prayer and faith sharing led by the young adults on the CHWC staff.”

Volunteers also had the opportunity to attend daily Mass and pray the rosary as a group. On Friday those from Sacred Heart went to downtown Chicago for pizza and some fun at Navy Pier, as a reward for a week of hard work.

By the time the CHWC trips end in August, all together 12,000 participants and over 450 Catholic parishes will have attended 2011 camps in 44 spots around the United States and one in Jamaica.

The national Catholic Heart Workcamp program was founded in 1993 by Florida residents Steve and Lisa Walker. Participants raise money to pay their way to the camps. This year CHWC volunteers were asked to do some soul-searching: to live life uncovered, to live life boldly and to know their “soul truth” — that they were made for goodness.

Catholic HEART volunteers usually camp out in a school or some other similar building. “We were at St. Thomas More High School,” says Siemer. “It is not air-conditioned. But waiting in line (to use shower and restroom facilities) and sleeping in a warm building is part of the sacrifice of the Workcamp experience.”

CHWC is often a life-changing week, Siemer concludes. “Catholic HEART Workcamp is something young people can do to pump up their faith. It trains them to be better stewards,” she says. “Remember, they need to realize it is not going to be their church someday. It is their church now.”