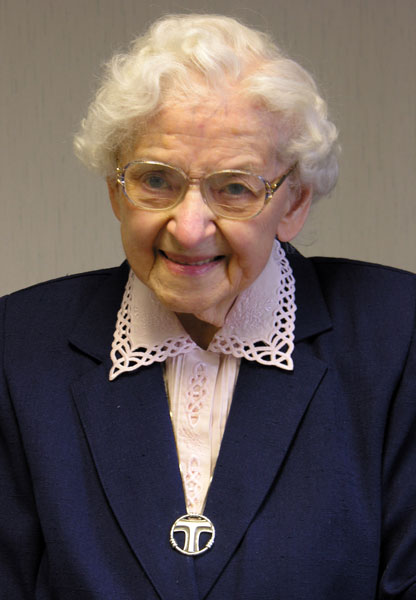 Sister Angelus, the former Sara Edith Gardiner, was born in Springfield on Feb. 2, 1912, the daughter of William and Effie Morgan Gardiner. Her home parish was St. Joseph's Parish in Springfield. She entered the congregation on Feb. 2, 1937 and professed religious vows on Oct. 4, 1939.

Sister Angelus was a graduate of Springfield College in Illinois, the College of St. Francis and DePaul University, and did post-graduate studies at Loyola University. She served the community as a teacher in community-related institutions. She also served at St. Anthony's Memorial Hospital in Effingham from 1977-1994 and spent most of that time as coordinator of hospital education and community relations. She returned to St. Francis Convent in 1994.

In addition to her parents, Sister Angelus was preceded in death by three brothers: John, Elmer and Walter Gardiner, and one sister, Frances Eastep.

She is survived by a niece, Mary-Jo Gardiner, several nephews including Les Eastep, Don Eastep, Larry Eastep, William Gardiner, Keith Gardiner and Gerry Gardiner, plus other nieces and nephews as well as many great-nieces and great-nephews and her Franciscan Sisters with whom she shared her life for over 74 years.

The Eucharistic Celebration and Rite of Christian Burial was celebrated on Aug. 22 by Father Andre Schludecker, OFM, in St. Clare of Assisi Adoration Chapel at St. Francis Convent. Burial was in Crucifixion Hill Cemetery with Staab Funeral Home in charge of arrangements.