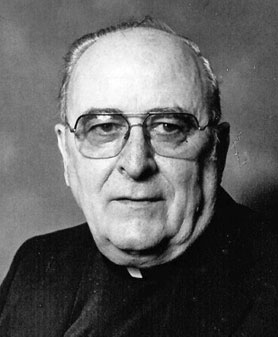 PALATINE — Father Patrick J. Durkin, CSV, passed away on Aug. 14 at St. Joseph's Home for the Elderly here at age 85.

Father Durkin was born March 13, 1926 in Chicago, the son of the late Michael and Anna (Ryan) Durkin. He was preceded in death by his parents, his brother Harry Cerjak and his sister Norine Accettura.

Father Durkin joined the Viatorians in 1945 and was ordained a priest in 1952. He began his teaching career at Spalding Institute in Peoria and also taught at Cathedral Boys/Griffin High School in Springfield before being called to Chicago's northwest suburbs to help open the area's first Catholic high school. When St. Viator High School in Arlington Heights opened in 1961, Father Durkin was dean of men and also taught biology. He remained at the school until 1970.

He served as hospital chaplain at Manteno State Hospital in Manteno before heading west and serving as pastoral care director at O'Connor Hospital in San Jose, Calif., and St. Jude Hospital in Fullerton, Calif. He retired in 1995 to La Mesa, Calif., and later moved to Las Vegas. He relocated to the Viatorian Province Center in 2010 where he lived until moving to St. Joseph's Home.

Father Durkin is survived by his brother and sister-in-law William and Virginia Cerjak of Glendale, Ariz., along with many nieces and nephews and great-nieces and great-nephews.

A Mass of Christian Burial was held on Aug. 18 in Palatine and internment was at the Viatorian plot in Queen of Heaven Cemetery in Hillside.