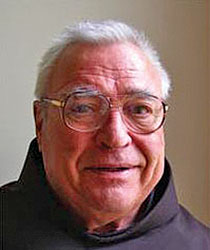 He was born Nov. 2, 1930 in Columbus, Neb., and given the name Donald by his parents Peter W. and Frances A. (Miller) Lakers. He entered the Friars Minor on July 4, 1951 as a novice after his minor seminary formation and made his simple profession a year and a day later. He professed his solemn vows on July 5, 1955 at Our Lady of Angels in Cleveland. Bishop Henry A. Pinger, OFM, ordained him a priest on June 24, 1958 at St. Francis Church in Teutopolis.

From 1960 to 1965 Father John Joseph was a student at Oxford University in England, where he earned his degree in philosophy; he also took a sabbatical year in Washington, D.C., from 1973 to 1974.

Father John Joseph, also known as Father JJ, taught philosophy for almost 40 years, beginning at Our Lady of Angels Seminary in Cleveland in 1960. He moved to Our Lady of Angels in Quincy in 1965, and completed his teaching career at Quincy University (College) from 1968 to 1998, when he received the status of professor emeritus.

In his later years of teaching, he was best known for a course in Christian marriage, in which he prepared hundreds of students for married life, combining his linguistic philosophy with his experience, giving spiritual direction to hundreds of married couples, especially those in a troubled marriage. He also authored the book Christian Ethics: An Ethics of Intimacy.

As a gift for his 80th birthday last year, friends and former students established an endowed scholarship at Quincy University in his honor. Additionally, he was given an honorary doctorate of human letters at the QU commencement on May 22, 2011 to recognize him for "a lengthy and illustrious career of scholarship, teaching, and administrative service at QU and a continuing mission of providing spiritual guidance to the community."

For 46 years, Father John Joseph helped out at local parishes in the area. He especially left his mark on the parishioners of St. Joseph Parish in Quincy and several other parishes. He also presided over countless weddings at Quincy University Chapel. For a number of years he was involved with the Catholic Family Camp Movement at Pere Marquette State Park.

Father John Joseph was preceded in death by his parents and his brothers Robert and Paul Lakers. He is survived by his sister Eleanor Alexander of Freehold, N.J.; his brother Tom Lakers of Oak Ridge, Tenn.; 11 nieces and nephews, 14 great nieces and nephews and their families.

The Mass of Christian burial was celebrated Nov. 8 in the chapel at Quincy University. Burial was in the friars' section of Calvary Cemetery in Quincy.