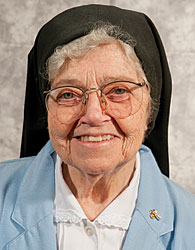 ST. LOUIS — Sister Dolore Gerau, SSND, died Nov. 8 at Anna House at The Sarah Community in Bridgeton, Mo., from complications from a stroke. She was 92 and a former teacher and secretary.

The funeral Mass was held Nov. 11, in the School Sisters of Notre Dame Theresa Center chapel in south St. Louis County. Burial was in Sancta Maria in Ripa Cemetery.

Sister Dolore was born in St. Louis. She entered the congregation of the School Sisters of Notre Dame in 1938 from All Souls Parish in Overland, Mo. She professed first vows in 1942 and final vows in 1948. She earned a bachelor's degree in home economics from Our Lady of the Lake University in San Antonio, Texas, in 1945 and a master's degree in home economics education from St. Louis University in 1951.

Sister Dolore also served as a secretary at St. Gabriel the Archangel in St. Louis, 1982-2006.

She is survived by a sister, Sister Mary Rose Gerau, SSND. She was also the aunt of Sister Rose Mary Ryan, SSND.