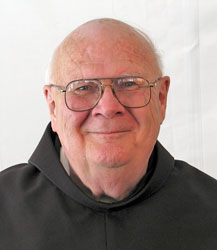 Father Dismas Bonner, OFM, passed away on Nov. 13 at Loretto Home at the motherhouse of the Franciscan Sisters in Springfield. He had been suffering with Chronic Obstructive Pulmonary Disease (COPD).

He was born William to William L. and Rose E. (Orr) Bonner on Sept. 15, 1929, in Fort Wayne, Ind. At the age of 22, after some time studying chemistry at Purdue University and at the St. Joseph Minor Seminary in Westmont (Oak Brook), he entered the novitiate of the Franciscan Order on July 4, 1951 and professed his final vows on July 5, 1955. He was ordained a priest by Bishop Henry Pinger, OFM, on June 24, 1958.

Two years after his ordination, Father Dismas went to Rome and studied at the Pontifical Franciscan University Antonianum for a year. In 1961 he returned to Washington, D.C., to finish his studies in Canon Law at Catholic University. He began his teaching career in Canon Law in 1963 and carried on his professorship for the next 15 years at St. Joseph Seminary in Teutopolis and at the Catholic Theological Union in Chicago.

In 1978, Father Dismas was elected provincial minister of Sacred Heart Province. He served in this capacity for nine years. In 1987, he took a year's sabbatical in Washington, D.C., and then in 1988-1989 he lived at Tau House in New Orleans and worked as a member of the Archdiocesan Spirituality Team.

From 1989 to earlier this year, he lived at St. Germain Friary in Dittmer, Mo., and carried out a number of ministries as a preacher and spiritual director. His 53 years of priestly ministry and Canon Law expertise touched many hearts and religious communities throughout the country. He will be remembered for his great humor, compassion and stalwart championing of the Franciscan life.

In October, Father Dismas was taken to the Franciscan infirmary because of ill health.

Father Dismas was preceded in death by his parents. He is survived by his sister Rosemary Ankenbruck and four nephews: Tim and wife Robin, Michael and wife Cathy, Steve and wife Donna and Pat and wife Amy; and many grandnieces and grandnephews.

Funeral services for Father Dimas took place on Nov. 16 at St. Anthony of Padua Parish in St. Louis. Burial was in the friars' section of Ss. Peter and Paul Cemetery in St. Louis. Donations in Father Dismas' honor may be made to the Franciscan Friars at 3140 Meramec St., St. Louis, MO 63118-4399 for retirement and health care of the Franciscans.