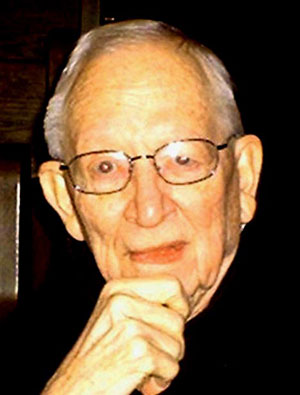 Father Elstan (James) Coghill, OFM, 85, died May 9 in Loretto Home at the Motherhouse of the Hospital Sisters of St. Francis in Springfield.

After a first practicum year for preaching after ordination, Father Elstan spent the rest of the priestly career in parish work, except for one year of continuing education in 1972-1973. He made the circuit of almost the whole province: eight years in Chaska, Minn.; two years in St. Paul, Minn.; one year in Memphis, Tenn.; six years in Columbus, Neb. at St. Bonaventure; five years at Harbor Springs, Mich.; seven years in Bastrop, La.; three years in Memphis, Tenn.; two years in Chanhassen, Minn.; 11 years in Victoria, Minn.; and six years at Cross in the Woods in Indian River, Mich., as senior associate. He retired to Our Lady of Angels Friary in Villa West in Sherman in 2002, and eventually moved to Loretto Home where he passed away.

During the years he was stationed in Victoria, he regularly wrote columns for the Victoria Gazette, which were collected into a book entitled Prints of a Priest.

Staab Funeral Home, Springfield, was in charge of local arrangements.