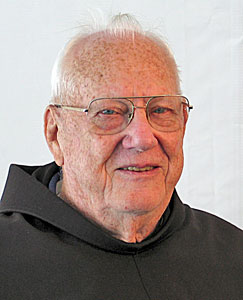 ST. LOUIS — Father Joseph Benedict Hagen, OFM, a member of Sacred Heart Province of the Order of Friars Minor (Franciscans) died at the age of 91 on Dec. 13, 2011 in a St. Louis hospital.

He was born July 15, 1920, in East St. Louis, the son of Stephen and Bertha (Zimmer) Hagen and named of Victor. He entered the Order of Friars Minors on Aug. 13, 1940, when he entered the novitiate of Sacred Heart Province. A year and a day later he professed simple vows, and on Aug. 4, 1944, he made his solemn vows. Bishop James A. Griffin of the Diocese of Springfield in Illinois ordained him Dec. 20, 1946.

Father Joe Ben served the church and the order in three main ministries: parish work, preaching and retreat ministry, and hospital chaplaincy. Over a period of 23 years, he served in parishes in Iowa, Illinois, Louisiana, Wisconsin and Missouri.

Father Joe Ben was the chaplain of St. Elizabeth Hospital in Belleville for 13 years (1980-1993). During his priestly career, while carrying out his primary assignments, he also served as chaplain to sisters and to the incarcerated.

Father Joe Ben moved from full-time active ministry to the position of "senior associate" in 1998, but he did not stop serving the church and the order. For three years (1998-2001), while living at St. Mary in Madison, he provided substitute ministry throughout the Springfield diocese. For six more years (2001-07), he worked out of Our Lady of the Lake Friary in Ashland, Wis. In 2007 he moved to St. Anthony Friary in St. Louis, where he retired and took on some "supply ministry," helping out in parishes where needed.

A memorial Mass was celebrated on Dec. 16, 2011, at St. Anthony of Padua Church in St. Louis. His cremains were buried with his parents in Belleville.

Memorials in his honor can be sent to the Office of Development, Franciscan Province of the Sacred Heart, 3140 Meramec Street, St. Louis MO 63118-4399.