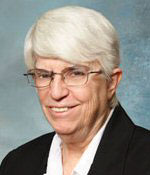 During the 1980s, Sister Joan became a registered nurse and worked in healthcare ministry in West Virginia and St. Louis until 2001 when she was elected to her community's leadership team for five years in Pittsburgh. Then she became co-director at the Pittsburgh motherhouse. Most recently she was involved in music and liturgical ministry.

She was preceded in death by her parents, Herman and Ana (Campo) Albaugh, and brother Herman. She is survived by her sisters, Jacqueline Kinser (Ohio) and Rosalie Hunt (Florida), and Sisters of Divine Providence and associates throughout the world.

A funeral Mass was held Dec. 27 in the chapel of the Divine Providence motherhouse near Pittsburgh.

Memorials can be made to the Sisters of Divine Providence Ministry Fund in care of the Office of Development, 9000 Babcock Boulevard, Allison Park, Pa., 15101-2793, or online at http://www.divineprovidenceweb.org/support-us/donate-now.php.